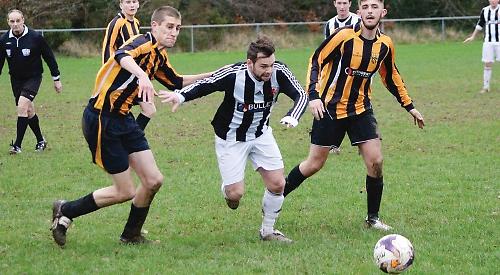 Woodcote dominated from the first minute and won a series of corners which saw the beleaguered defence clear off the line on more than one occasion while Frank Dillon’s powerful shot after 25 minutes rebounded off an upright with the keeper well-beaten.

A minute later the deadlock was broken when the visitors’ defence only half-cleared and Andy Bullett rifled through the crowded penalty area.

On the 30 minute mark, Dave Givens found himself in the clear but his powerful angled shot was saved by the keeper. The respite was short-lived as Woodcote made it 2-0 on 35 minutes. Frank Dillon did well to keep the ball in play on the left and his cross picked out James Worsfold perfectly to score with his head from a yard out.

A landslide looked like developing until two minutes later, when Jake Tucker’s back-pass was too weak and a Mansfield forward nipped in to make it 2-1. The visitors’ hopes were dashed yet again at the end of the half when Jonny Summers, tightly marked by two defenders, somehow got his head to another Frank Dillon cross to head home for 3-1 at the interval.

The second half was barely underway before the score was 4-1. Woodcote were awarded a free kick just outside the box and skipper, Mike Butcher stepped up to guide the ball beyond the wall and into the corner of the net.

Woodcote then sat back and played some good possession football but their complacency led to some unnecessary errors and around the hour mark Kane Roberts was twice called upon to tip over from powerful shots.

On 85 minutes Mansfield Road exploited another defensive error to make it 4-2. With five minutes left to play Woodcote put the result beyond doubt. Mike Butcher’s free kick was too hot for the keeper to hold and Jonny Summers was on hand to score his second from close range to complete the scoring at 5-2.

In the third round of the competition Woodcote/Stoke Row have been drawn away to Oxford City Nomads.