Madzar is hat-trick hero for Hotspurs 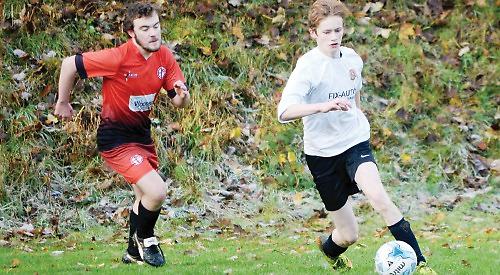 ELIAS MADZAR netted a second half hat-trick as HENLEY HOTSPURS U15s continued their push for the East Berks League title with an 8-2 win at home to AFC ALDERMASTON U15s on Saturday.

Henley dominated the game and attacked from the beginning. Alfie Hearn opened the scoring with a free kick just outside of the box within the first few minutes. This was closely followed by a second goal from Sam Jarvis assisted by midfielder Charlie O’Neil.

A close range finish from Josh Le Beigge was set up by Alfie Hearn to make it 3-0 but Aldermaston fought back and scored their first goal of the game.

A solid performance from Henley’s defence and some good saves from goalkeeper Matthew Balchin blocked further attempts on goal and Hearn scored his second goal for Henley after great work by Ben Harrison to set it up.

Hotspurs’ captain, Max Gaskin scored a good goal in the opening minutes of the second half. Aldermaston continued to work hard and scored from a long-range effort.

Madzar, Henley’s man-of-the-match, then started his goal tally with a free kick from just outside the box and another two in quick succession to deliver his first hat-trick of the season.

AFC HENLEY HURRICANES U10s crashed to a 2-1 defeat away to ASCOT ACES U10s. The Hurricanes got off to a good start which saw efforts by striker Tom Bonser and midfielder Nicolai Bruun-Andersen go close.

However, it was the hosts that took the early lead as they found their way through the Hurricanes’ defence to score from close range.

This did not dent the visitors’ confidence as they rallied and almost found the equaliser as Tom Atkinson, playing in his favoured number 10 role, blazed over from close range after good work by Bruun-Andersen.

In the second quarter Joe Turner was the motivational force behind the Hurricanes’ fight and he drove the midfield forward. It was against the run of play that the Aces went 2-0 up after an individual solo effort from long range.

The Hurricanes responded as Bruun-Andersen finished with accuracy after a lovely flowing move to make it 2-1.

Early in the second half captain Luca Thomson was called into action as the Hurricanes poured forward and he showed great strength and resolve to keep the Aces out. When the hosts did get through they found man-of-the-match Ben Horner in terrific form as he pulled off a number of good saves and blocks.

End-to-end football ensued as Olly Saunders on the left side of midfield created a number of chances including a volley that had the Aces’ keeper grasping at air only to see the ball flash past the post.

Long range efforts by Turner and Atkinson also just failed to find the back of the net with good efforts.