Davies at the double as side make county cup progress 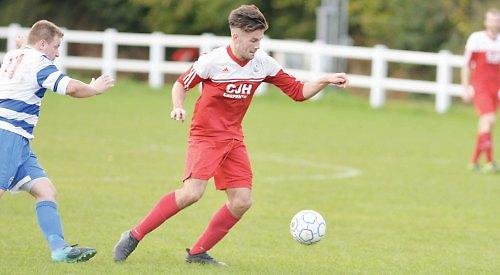 HENLEY Town went through to the third round of the Oxfordshire Senior Cup after hard-fought 3-2 win at North Leigh United on Saturday.

All five goals were scored in the first half, with forward Michael Davies netting twice and young defender James Griffiths grabbing what turned out to be the winner.

Henley started slowly and fell behind inside the first five minutes. Goalkeeper Matt Hill sliced his kick into midfield where the ball was lobbed back over him by Jozef Fullerton into the net.

The visitors responded well and drew level when Chris Hood’s good run and cross saw Davies head home. Davies put the Red Kites ahead mid-way through the first half, slotting in left-footed after more good work from Hood.

Another goalkeeping error from Hill saw North Leigh draw level through Ben Curtis as the Henley keeper brought down his man in the box and couldn’t keep out the resulting spot kick.

Henley went ahead for the second time when the hosts failed to clear Seve Mayberry’s free kick and Griffiths slammed home following a goalmouth scramble. After a hectic first period, the second half was a more cagey affair. Henley tried to control the game but were forced into some resolute defending as North Leigh threw men forward in the final 15 minutes.

In the next round of the competition Henley Town have been drawn away to Oxfordshire Senior Legaue Premier Division side Adderbury Park.

“I’m pleased for Michael Davies getting a couple of goals, he didn’t get on the pitch in the last game but he showed a great attitude in training and that’s why I started him.

“I’m confident for the next round, I think we can go there and get a win. They are in a lower league than us so hopefully we can progress further in the competition.”