Bonsor wraps up scoring for Hurricanes 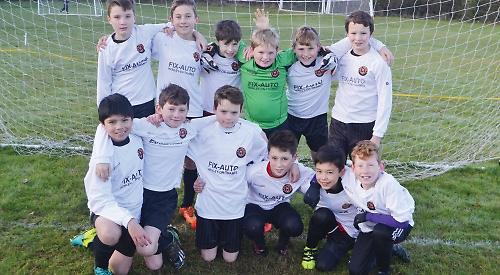 The Hurricanes started the game brightly with striker Nicolai Bruun-Andersen making some penetrating runs and going close on a number of occasions but the first quarter ended 0-0.

The second quarter was a tight affair with Joe Turner marshalling the Hurricanes midfield with his power packed defending and insightful vision to drive the Hurricanes forward.

It was against the run of play that the visitors took the lead as Ben Horner was left exposed and the Hurricanes could not respond before the half-time break.

Following a tactical reorganisation the Hurricanes came out on the front foot in the third quarter and it was Luca Thomson, switched to the left wing, who cut in from the left and played a one-two with Tom Atkinson before slotting home beyond the keeper.

In the final quarter Atkinson delivered an accurate corner into the heart of the visitors’ penalty area and man-of-the-match Nicolai Bruun-Andersen muscled his way onto the end of it to power his header beyond the keeper.

The Hurricanes wrapped the match up after Thomson slipped the ball through to Tom Bonsor and he buried his shot into the bottom left-hand corner of the net to make it 3 1.

AFC HENLEY HOTSPURS U12s went down to defeat at home to WOODLEY SAINTS U12s in their East Berks League encounter at Jubilee Park last Saturday. The Hotspurs started the game well only for Woodley to take the lead against the run of play.

Henley Hotspurs found their way back into the match with a goal from Michael Slingo following a goal-mouth scramble.

For the remainder of the first half both sides tested the goalkeepers with shots. James Preston in goal for the Hotspurs comfortably saved while the Woodley keeper also pulled off impressive saves from George Lamin's efforts.

The second half was end to end as the Hotspurs defence coped well protecting the keeper. With 10 minutes of the match remaining Woodley scored their second goal and began to grow in confidence.

The visitors added a further two goals in a frantic last five minutes to run out comfortable winners.