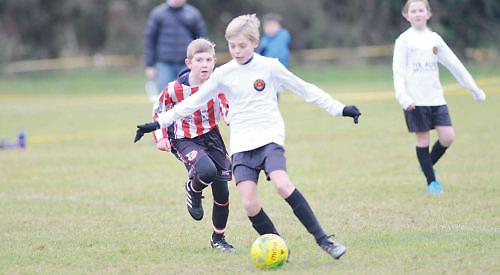 AFC HENLEY HAWKS U12s made it five consecutive wins in Division 7 of the East Berks League with a brutal second half display against SANDHURST TOWN U12s at Jubilee Park last Saturday as they ran out 15-1 winners.

Hawks’ winning streak has been based on solid defence, and strong midfield organisation and after a battling start by both teams, chances came for Hawks to open the scoring through Tom Horsley who was denied by good goalkeeping from the Sandhurst keeper.

The deadlock was broken by a flowing move and finish from Dylan Gadsdon on the right. Quick substitutions saw Angus Carle net twice to give the Hawks a 3-0 lead at half-time.

Hawks flew out of the blocks in the second half, with Jackson Meredith netting within seconds. Hawks were now in their stride with some devastating attacking play. The pace of Felix Wilson, and slick passing saw the goals start to flow. A first for the Hawks for Wilson was closely followed by another move up the wing started by Meredith, who linked up with Tom Horsley to play the ball across the six-yard line for a tap-in for Wilson. Another slick move saw Luca Emmanuel on the score sheet with a neat finish.

With Hawks now rampant, the goals flowed with some good attacking play. All departments were involved in the goals, building from the back with neat passing from Elliott Rowberry, Daisy Morgan, Jake Heppenstall and James Grant providing the platform for the attackers to do their job. An audacious lob attempt from Jake Tallent was close, before Horsley smashed a similar effort into the top corner.

Sandhurst battled throughout, and never dropped their heads with some good tackling and desperate defending.

AFC HENLEY HURRICANES U10s crashed to a shock 3-2 cup defeat at the hands of the BRACKNELL ARROWS U10s at Jubilee Park despite the best efforts of debutant Will Riley.

The Hurricanes got off to the best possible start as Riley fired the hosts into an early lead. In the dying minutes of injury time in the first quarter the visitors won a corner which was headed home for the equaliser.

Riley was in the thick of the action once more as he played a lovely through ball to Nicolai Bruun-Andersen who beat a couple of Arrows defenders before thumping the ball home.

Captain Tom Atkinson marshalled the home defence well but was powerless to stop the Arrows’ second equaliser. After a quickly taken restart the Hurricanes were taken by surprise and keeper Ben Horner could do nothing to prevent the hosts from letting the lead slip for a second time.

Olly Saunders started the second half well pulling the strings from his deep lying midfield role as he tried to unpick the Arrows’ defence whilst blunting any attacks that came his way. Saunders was powerless though to stop the Arrows darting into the lead after the hosts lost the ball deep in their own half and the Hurricanes trailed 3-2 at the end of the third quarter.

Joe Turner led the Hurricanes’ fight back in the fourth quarter with some penetrating runs and clever through balls as he tried to release striker Luca Thomson. Thomson went close on a couple of occasions but could not get the elusive equaliser. Ben Horner pulled off a good penalty save half way through the final quarter which gave the Hurricanes hope of getting back into the game. Bruun-Andersen went down the other end of the pitch but saw his 20-yard effort rebound off the crossbar.