Flynn's late score lifts side out of the relegation zone 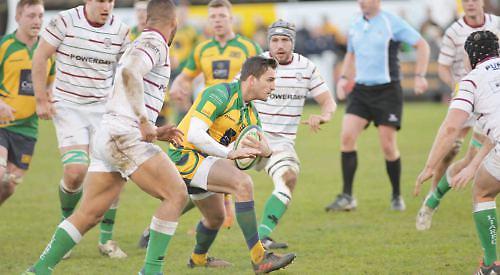 A TRY in the last minute spared the blushes for Henley Hawks and gave them a much needed win in their efforts to pull away from the bottom echelons of the league.

London Irish Wild Geese, who were quick and well drilled in defence, caused problems but with their dominance of possession and five missed kicks at goal, the Hawks should have won more comfortably than they did.

The Hawks started strongly and quickly put the visitors on the back foot. However, handling errors gave the momentum to London Irish who went in front with a penalty from Turner.

The Wild Geese looked sharp early on and scored the first try of the game through winger Matthew Killeen who cut through some weak Hawks tackling to score. Turner converted.

The Hawks, in their eagerness to run the ball, struggled to penetrate the well organised Irish defence and were forced into making mistakes. Peter Hodgkinson kicked intelligently for the Irish but eventually Henley began to dominate possession and with George Jackson sniping round the fringes and the back row of Tom Hall, Marcus Lowe and Connor Morrison dominating the loose.

The Hawks set pieces were also functioning well and resulted in a try from a driving line-out with Stuart Phillpott touching down.

The Hawks created a number of scoring opportunities only to see final passes dropped or penalties concede. A lack of direction in attack made things easy for the Irish to defend and the visitors went in to the break 10-5 ahead.

The Hawks reduced the arrears straight after the break with a Jackson penalty but earlier dominance was replaced with more frustration as the visitors increased their intensity. A lapse in concentration and poor tackling again let in the Irish with Bush scoring his side’s second try which Turner converted.

Despite coming under increasing pressure in the scrums and with the line out not functioning as well as it had done in he first half, the Hawks still had plenty of spirit and began to build momentum again. David Hyde drove well in the loose as the Hawks started to attack with more width. A good move involving backs and forwards was illegally stopped by Irish prop Kerry O’Sullivan who was yellow carded and from the next attack, Connor Hayhow, who was a threat all afternoon, collected a long miss pass from David Hodgkinson to score in the corner.

The Wild Geese were now only making rare visits into the Henley 22 but one of these resulted in a try for centre Ben Kitching. Turner’s conversion gave the Irish an 11 point lead.

Back came the Hawks who spent the rest of the game camped in the visitors’ 22. A number of attacks following a break by Comben ended with the forwards driving over the line and allowing Marcus Lowe to touch down for a try which Jackson converted.

A frantic last couple of minutes saw the Hawks striving to gain that vital score. Eventually the crucial try came from another driving maul with Louis Flynn being credited with his side’s fourth try and a bonus point win.

The jubilant scenes from the Henley players at the end showed there is still a good spirit in the squad which bodes well for the two away games at Barnstaple and Chinnor before Christmas. Speaking after the win that lifted the Hawks out of the relegation zone, head coach Pete Davis said: “We made it very difficult for ourselves, missed a few chances and didn’t keep our composure at the right time. We should have come away with more points in the first half. London Irish were good but the boys are stepping up and learning to deal with tight games. There are no teams that we fear. We should have won a few games recently and whilst the performance today wasn’t at the standard of recent weeks, the spirit is building and we are looking forward to the next matches.”