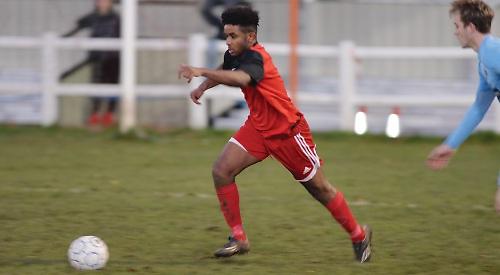 However, after the break the visitors took control of the game, and with the hosts having a man sent off the Red Kites were put to the sword by a dominant and physically stronger Ardley side.

The Red Kites again had to make changes due to the injuries to Chris Byrne and Brad Hoy and introduced new signings Nabil Rachid, Loridon Daka and Galard Wendling.

Henley took the lead in the 24th minute when Josh Dillon rose among a mass of bodies in the six-yard box to head home a right wing Seve Mayberry corner.

Ardley’s Leam Howards hit the post and Mayberry missed a sitter before Matt Cruse thumped home a pass from Jack Heap after 32 minutes to level the scores.

The Red Kites restored their lead in the 37th minute when Mayberry refused to give up on a ball that looked to be heading out of play and crossed for Reece Buckett to head past Ardley keeper Lee Farrow. Mayberry had to receive treatment after he slid into the barrier after making the cross and had to be replaced by Galard Wendling. The game continued to be end-to-end as the hosts went into the interval 2-1 up.

United came out for the second half quicker, physically stronger and completely outplayed Henley.

Three minutes into the half the visitors were awarded a penalty when Sergio Guerrero was adjudged to have been pushed in the box resulting in the referee Paul Andrews pointing to the spot. Howards coolly slotted home to equalise.

Cruse gave Ardley the lead for the first time in the game in the 54th minute when fed in behind the static Henley defence to run on to smash the ball past the helpless Matt Hill. In the 64th minute the referee awarded Ardley another penalty which Cruse took to bag his hat-trick. Soon after Henley’s Daka was shown a second yellow card and sent off, leaving his side with 10 players for the remaining 30 minutes.

Within four minutes Carl Tappin fed Howards inside the box where he twisted and turned before tucking home past Hill. Howards completed his treble 10 minutes later when a through ball saw him round Hill before sliding into the empty net. With seven minutes left Cruse was tripped in the box and Jacob Walcott fired the penalty into the top corner. Cruse then hit the post before substitute Will McEachran made it eight when latching on to a loose ball a squeezing home from the byline with the aid of a deflection.

In injury time Howards bagged his fourth when cutting in from the right and smashing home with the aid of a defensive deflection.

l Before the kick-off of last Saturday’s match at Henley Town’s Triangle ground all the players and spectators held a minute’s silence in memory of the victims of the Brazilian Chapecoense Football Club who died in the recent plane crash in Colombia.