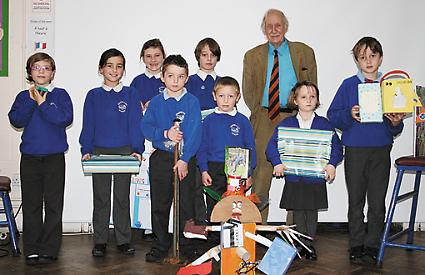 The 76-year-old presented prizes to the winners of a competition in which the children took turns to present their inventions to him and a judging panel made up of school governors.

More than 120 pupils were given two months to come up with an invention designed to solve a common problem.

The best invention idea from each class was presented to the judges. George Bowden, six, was the overall winner with his magnetic device to pick up small nuts and bolts. He won an aeroplane and parachute building kit and a certificate signed by Mr Baylis.

George, from Hambleden, said: “My invention was called a magnetic broom. It picks up anything that’s metal. Hopefully, when I grow up I will be an inventor.”