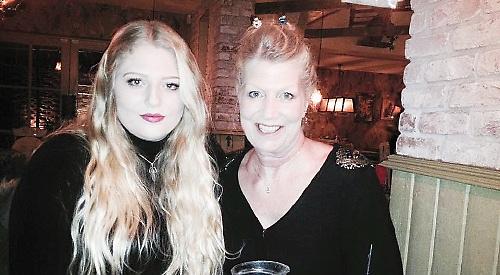 A WOMAN from Frieth who tried three times to kill herself because she hated the way she looks has told of her daily battle with a mental health condition.

Alanah Bagwell, 20, suffers from body dysmorphic disorder, which left her housebound in her teens because she thought her appearance offended people.

The condition causes sufferers to be excessively conscious of their appearance, even though onlookers see nothing out of the ordinary.

Miss Bagwell has been making progress since being treated at the Priory clinic in north London when she was 18 and is now at university.

Her recovery led her to be filmed for a TV documentary called No Body’s Perfect, which was broadcast on BBC4 last night (Thursday). It focused on four people who hate the camera as they are challenged to be photographed.

It was the first time she had let someone else apply her make-up, which meant she was seen without it.

She said: “It was really, really hard because I was facing my biggest fear.

“Rankin’s photos are amazing but because I was in them I didn’t see it.”

Miss Bagwell grew up in Frieth with her three brothers and parents, Greg, who is in the RAF, and Scarlett.

The family moved to Norfolk when she was 11 but returned when she 14 and she started going to Sir William Borlase’s Grammar School in Marlow.

It was there that she first noticed symptoms of body dysmorphic disorder but at the time she didn’t realise what it was.

“I was very aware of the people around me talking and I thought they were talking about me and laughing at me,” she said.

“I would look in windows and reflective surfaces and feel very anxious.

“At first I didn’t think it was anything abnormal but then I stopped going to school and leaving the house. That was when the issue really started affecting my life.”

Miss Bagwell refused to leave her bedroom at home, so her mother would look after her, taking her food and drink and helping her to wash.

The teenager was suffering from depression because of her condition.

“There was lot of shame and guilt and me feeling like it was my fault,” said Miss Bagwell. “I thought when people saw me they would laugh at me and ridicule me.”

Her parents tried to get help from the NHS’s child and adolescent mental health service but this did not help.

Then Miss Bagwell saw a therapist and started having cognitive behavioural therapy, which helped a bit.

“I was able to leave the house with mum but most of the time I was still housebound,” she said.

She was self-harming, compulsively picking her skin until she was bleeding or cutting herself so she would need to go to hospital for stitches.

Mrs Bagwell, 55, said: “As a parent it was absolutely awful. You want to be able to fix things and make things better with them and understand but because it is a mental health disorder you can’t put logic into that. I’m not sure I understand it now because I’ve never experienced it and do not know what it is like.”

Her daughter first became aware of body dysmorphia disorder when she was 16.

“I typed into Google ‘I’m so ugly I want to die’,” said Miss Bagwell. “I would often use Google and social media as part of my disorder but this time the Body Dysmorphia Disorder Foundation came up and I could see the symptoms.

“I watched a video and thought the people were a lot like me. They were similar and I could relate to them.” Her mother read about a body dysmorphia disorder study at the Maudsley Hospital in London and persuaded her daughter to take part.

It wasn’t until she had turned 18 and went into The Priory for five months of treatment that she began to get better.

“It was five months of constant support and people checking on me every 15 minutes,” recalled Miss Bagwell. “I had some of my best experiences there and some of the worst because it is the hardest thing I have ever done but it has got me to where I am today.”

She had more cognitive behavioural therapy, took part in group sessions and “exposure therapy”, for example, travelling on a bus in rush hour.

Miss Bagwell, who made her third and last attempt on her life when she was 18 and on weekend leave from The Priory, said: “I would go into the sessions and I would sit there with my hands over my face and my hair in front of my face. But it can get better no matter how hopeless it feels.” She has been making progress ever since and is continuing to have cognitive behavioural therapy every two weeks with a specialist.

Her improvement meant she was able to study for A-levels at The Henley College.

Although she only attended about 30 per cent of her classes, she managed to achieve an A grade and two Bs.

She started studying psychology at Brunel University in Uxbridge in September.

Mrs Bagwell said: “The college’s pastoral care team was brilliant and they enabled her to do it.

“The tutors were great at letting her know what they had done and wanted her to know if she needed help.”

Miss Bagwell was still studying for her A-levels when she was approached by the documentary makers through the Body Dysmorphia Disorder Foundation.

She said: “I had written a blog about my recovery and treatment and they asked if I wanted to do it. It is the best way to raise awareness, even though it was difficult.”

The filming took place in March and April and Rankin and disabled artist Alison Lapper persuaded her to do the photoshoot.

Miss Bagwell said: “I really, really wanted to push myself to try to do it. In the end I was okay with the pictures but it was really difficult for me.”

Her progress means she can now live independently and she has even joined the university’s rowing team — she had given up the sport when she became housebound at 15.

Miss Bagwell said: “I do still have bad days where I’m not able to get out the house but I’m so much better at making sure it does not affect me the way it used to.

“When I have a bad day it doesn’t become a bad week or a bad month.

“With my degree I eventually want to specialise in cognitive behavioural therapy for body dysmorphic disorder and do research into it — that’s what motivates me.”

Mrs Bagwell thinks it is the perfect career choice for her daughter.

She said: “She probably has more understanding then most professionals because she has lived through it.”