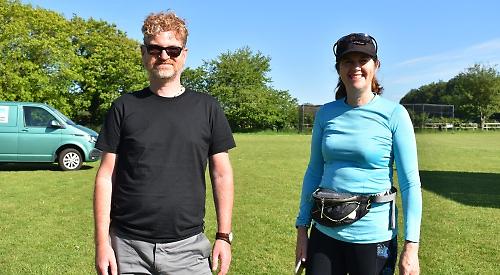 A MAN with cerebral palsy is attempting to run 1,900 miles in 85 days to raise money for charity.

Tom Crossland, 40, of Reades Lane, Gallowstree Common, is taking part in the Run To Refuge challenge, which involves completing the equivalent of 75 marathons between June 2 and August 28.

He plans to go round the coast of England and Wales.

He is raising money for the TRIBE Freedom Foundation, a British charity fighting to end modern slavery and human trafficking.

Mr Crossland, who is a clinical psychologist for the Berkshire Healthcare NHS Trust, set off from Kidmore End Cricket Club in his village on Wednesday last week.

He was applauded by about 40 friends, family and neighbours as he set off in bright sunshine.

Beforehand, Mr Crossland said: “I am really nervous but excited. It has been four years in the planning and now it’s just good to get going.

“I like the hot weather but it would have been nice to have the good weather to train in as well as it was cloudy and rainy for a little while.”

His first destination was Henley, then London, north to Chelmsford in Essex and around Norwich. He will then carry on towards Newcastle upon Tyne before heading west to Carlisle.

From there he will run south to Lancaster, Liverpool and Chester before following the coast of Wales round to Bristol.

He will then continue to Weymouth, Southampton and Brighton before heading north back to London and finally return to the cricket club on August 28.

Mr Crossland, who lives with his wife, Rebecca, 39, plans to run between 45km and 60km a day and have two rests days each week.

He has a support vehicle to carry his camping gear and will stop every 10 miles to refill his water bottle.

At night, he will camp or stay in a hotel or bed and breakfast or with friends, depending on coronavirus restrictions.

Each day, his team is updating his progress on his social media channel @runtorefuge.

Kidmore End parish councillor Iain Pearson, who was among those seeing Mr Crossland off, said: “I’m really happy he chose this ground to start from. As a member of the community and the council, I think this is fantastic. I really do wish him the best of luck and can’t wait to see him back here when he finishes.”

Mr Crossland, a former coach at Shiplake Vikings Boat Club, will have different people join him during parts of the challenge to run some of the distance.

Rachel Head and James Hall, who work for IT company Teneo, of Theale, will be joining him in North Wales, Swanage in Dorset and during the last leg back to the club.

Ms Head said: “We want to support the cause and the effort he is making. As a company, Teneo does a lot of charity work and we’re so impressed by what Tom’s trying to achieve and we want to help him raise money.”

Mr Crossland was unable to walk until he was three years old as his condition affects his ability to move and maintain balance and posture.

He still has daily training and strengthening sessions to help him run as it does not come naturally.

Despite this, he has taken part in many ultra-endurance running challenges, including the 180-mile Grand 2 Grand Ultra in Utah in 2017 and the 162-mile Run For Love in the Azores in 2019, but this run will be the longest to date. He hopes to raise £20,000 for the foundation and has already reached £3,915. Modern day slavery is hiding in plain sight,” he said. “It is happening in villages and towns locally.

“In 2019, 100 people in the Thames Valley area were identified as suspected victims of modern day slavery with 139 cases being referred to the National Crime Agency by the police.

“Of those, 107 were suspected of being exploited for labour with 23 sexual exploitation cases, five of domestic servitude and four other cases.

“An estimated one in four modern slavery victims are children. Vulnerable young people are trafficked for sex or being used to move drugs as part of ‘county lines’.

“We are all only one disaster away from becoming vulnerable to exploitation. We must stop it.”

After a week with only one day of rest, Mr Crossland made it to East Suffolk. By Wednesday he had completed 172 miles leaving 1,728 to go.

His social media team has even started a hashtag trend on Twitter, titled #WheresTom, for people to use if they spot him.