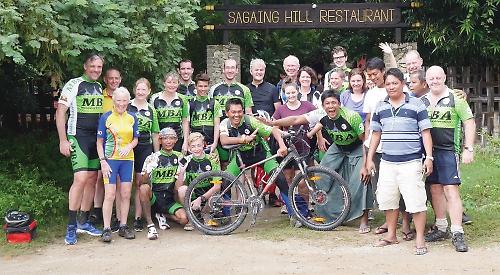 A FATHER and his teenage son have completed a charity cycle ride across Burma.

Chris and Adam Norris, of The Hamlet, Gallowstree Common, were part of a group which rode mountain bikes almost 340km from Yangon to Mandalay last month.

Adam, 14, is a pupil at Leighton Park School in Reading but was able to take part as it was his half term.

The pair raised almost £2,000 for the Hope Asia orphanage in Yangon, which they visited after flying back at the end of their challenge.

The orphanage was opened by Crispin Fairburn, from Caversham, after he visited the area in 2012.

Mr Norris, 46, said: “I have been privileged to visit Hope Asia on three occasions.

“I am always struck by the happiness and healthiness of the children and sharing a couple of hours with them is always very special.

“It never fails to bring a lump to my throat when considering what challenges they would face if they did not grow up in this loving environment.” He and his son were part of a team of 18 cyclists who took six days to complete the ride, sometimes in tropical storms. They hope to raise a combined total of £45,000.

Mr Norris said: “Each of us will undoubtedly have been enriched in some way by the many experiences we had in such a very short period of time. At our final dinner there was a team pledge to try to hit the team figure of £45,000 and if we can do so in the next few weeks that would be truly astonishing.”

Mr Fairburn said: “Congratulations to you all on doing such an awesome job. How fantastic to get to the end of the trip and know everyone was safe having had a great time and raised enough money to change lives. It doesn’t get much better!”