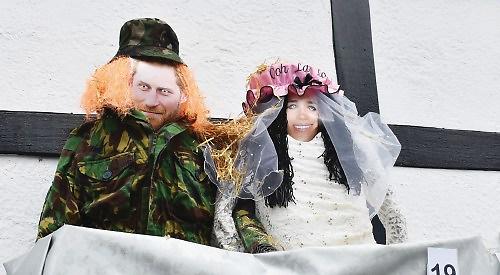 THE American president, a crying Australian cricketer and a suffragette were among the characters featured in Sonning’s ninth biennial scarecrow trail over the bank holiday weekend.

Thousands of people made the most of the sunny weather as they visited the village on Sunday and Monday to view more than 50 scarecrows created by residents as part of this year’s Sonning Festival.

They included the new Duke and Duchess of Sussex, the former complete with bright orange hair, the judges of Strictly Come Dancing and a “Straw-trooper” from Star Wars.

One design in Pearson Road, called “Crocodile Tears”, featured a cricketer with water pouring from his eyes, a reference to Australia team captain Steve Smith crying in a press conference after being accused of ball tampering earlier this year.

Among the political efforts was a design called “Trumpty Dumpty”, which featured a model of US President Donald Trump in a tree and a rhyme about his plans to build a wall at the border with Mexico.

Also on show were suffragette leader Emmeline Pankhurst, Shaun the Sheep and a safari display, dinosaurs and rabbits, while the Sonning Club had several scarecrows to mark the centenary of the RAF. A house in High Street which is currently undergoing renovation had a small model of a Lego man wearing a hard hat and hi-vis jacket.

Visitors could buy trail maps for £5 and tick off the scarecrows as they went round.

Five residents opened their gardens to visitors and there was a display of classic cars. Refreshments were served at the village hall in Pearson Road.

The event is expected to have raised more than £15,000, which will go to Sonning community groups and facilities.

Previous trails have paid for children’s play equipment, the Sonning jubilee clock and the restoration of the village’s water pump in High Street.

Barbara Carr, a member of the Sonning scarecrow and open gardens committee, said: “It went extremely well. We were very lucky with the weather and had lots of people. People in the village are so good at making scarecrows, we always get about 60.”

Meanwhile, dozens of people took to the water — and some ended up in it — at the biennial Sonning Regatta.

The event was held on the Oxfordshire bank of the River Thames, opposite Reading Blue Coat School’s boathouse and just upstream from Sonning Lock, on Saturday.

Competitors raced in categories including skiffing and canoeing and people could also try more unusual boats including dongolas, Canadian canoes and katakanus.

More than 30 teams and individuals took part in 45 races and many competitors wore bandanas, wigs or sombreros. The teams featured all ages of paddlers and had names such as Usain Boat, Fish Fingers and The Lockness Monstez. One race had to be stopped half-way along the course and restarted twice after the two boats collided, while in the final of the adult dongola a team member from one boat jumped across to the other to “take out” a rival, sending them both tumbling in to the water.

There was an unexpected arrival on the river by a bride who had been married at Reading Blue Coat School and received a round of applause from the crowds.

Hundreds of spectators lined the bank on both sides to watch the racing, many making the most of the good weather by bringing chairs or blankets for comfort.

There was also children’s entertainment including bouncy castles, a beer tent, barbecue and stalls. Many youngsters had their faces painted or decorated with glitter. A ferry transported visitors across the water.

Regatta chairman John Hargrave said the attendance was almost 800, making it the largest Sonning regatta since the event was restarted in 2000.

He said: “We ran more races than ever before and some close-fought ones. There was a lot of entries from schools in Sonning and Charvil.”

The regatta began in the early 1900s but was stopped after the Second World War. It was revived as a biennial event in 2000.

The festival also included a classic car and bike show on Sunday, open gardens and an art exhibition at Pearson Hall.