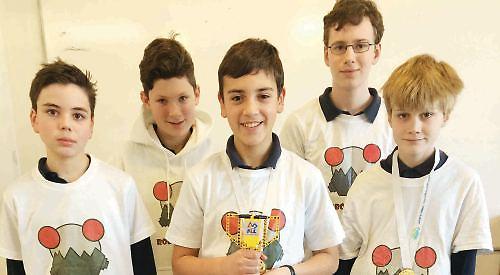 The Robot Turtles team, who are all members of the school’s Robotics Club, were competing against other schools from around the county.

They finished runners-up in the overall robot challenge, missing out on the title by just one second.

The students were Tom Fielder, Elio Dal Lago, Miko Billurcu, Nicholas Holm-Charlton, who are all in year 8, and Alexander McDonald, Fabian Holm-Charlton, Louis Malatt and Sam Little, from year 9.

The Robotics Club, which brings together science, technology, engineering and maths, usually meets twice a week in the creative technologies department.

It has its own STEM ambassador and FIRST® LEGO® League mentor Dr Kim Cave-Ayland, a control engineer at the Culham Centre for Fusion Energy, who comes in to help every week.

Each year the school buys the competition kit, which is partly funded by the students and includes Lego for building the challenges and the robotics challenge mat.

The department also built a special robotics table which enables pupils to practise for the competitions.