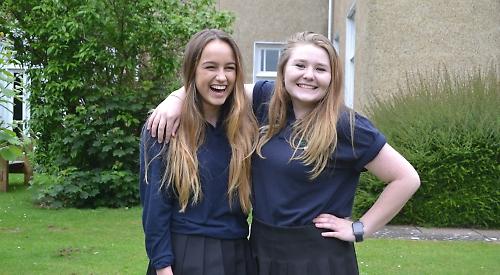 THE two new head girls at Gillotts School in Henley say they want to give something back to the school.

The co-educational academy in Gillotts Lane typically chooses a head pupil of each gender but decided this year that the two best candidates were girls.

Kiri Cheeseman and Helena Porter, both 15, were chosen after an application process that included a video audition, votes by students and interviews.

“It’s not set in stone that we always appoint a boy and a girl,” she said. “In this age of gender equality it made sense to appoint the two pupils who were genuinely most suited to the role.

“Normally we have a boy and a girl and in the past we have had three leaders with a boy and two girls.

“I discussed it with staff before making a decision.

“We came to our choice after seeing four students and going back to the heads of house who had been part of the process and taking into account all the areas. We have house captains and school sports captains so there will be plenty of opportunities for the boys to be represented.”

Ms Darnton added: “These were the two leaders we wanted for the school. I was bowled over by the girls’ maturity, thoughtfulness and ability to see things from a different perspective.

“They can come up with good ideas and help us find solutions when sometimes there won’t be enough money or enough space.”

Helena, from Peppard, said: “I wanted an opportunity to influence things at the school. It has given me so much over the time I have been here.”

Kiri, from Nettlebed, said she felt that she and Helena both had strong leadership qualities to help students get their voices heard.

“We want to take other students’ ideas forward and make the school a better place,” she said.

Kiri said: “There is a sense of community here. My parents came here and so have all my brothers and sisters. I feel it’s really important I give something back.

“I want to do things about student wellbeing, making sure students are really happy, especially with the Government putting more pressure on teachers to be aware of mental health. It’s really important that people feel comfortable talking about it.”

Helena said: “I feel Gillotts has supported us very well. I have had some bumps along the way but they have been smoothed out quickly.

“I would feel guilty if I didn’t give something back and this is an opportunity to do that. A lot of students would say it is a lot of extra work but I’ve been through the Gillotts experience.”

The girls will be in post until March and during that time they will represent the school, speaking at open evenings and helping to organise charity fund-raising events.

Ms Darnton said: “They stand up at open evenings and they give speeches which wow prospective parents, talking about their experience of the school. It’s really powerful.”

Helena and Kiri are also interested in the development at the school which will benefit students after they have left.

Gillotts is set to sell 3.4 hectares of land for about 50 homes in order to improve the facilities.

Plans include a new, larger hall, a creative technologies centre, a learning support centre and refurbishment of the science and music blocks.

The sports facilities would be improved with a floodlit, all-weather, multi-use games area.

Helena said: “We both agree we want to be part of the school development. We want to make sure that the students are aware of what’s going on and how that relates to the lower years.”