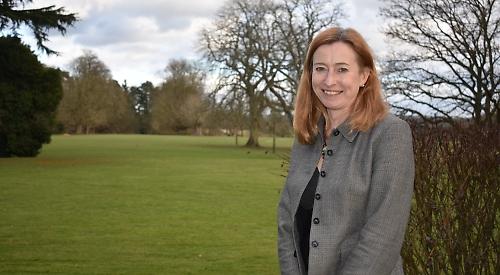 CATHARINE DARNTON loves her work. After 10 years as headteacher of Gillotts School in Henley, she is still enjoying it as much as the day she began.

Having held only four jobs since leaving university, 47-year-old Ms Darton says she is a “stayer”.

She believes that is the only way to effect change in a secondary school with 800 pupils and more than staff.

She explains: “Headteachers make an impact because they have a deep knowledge and understanding of the school they work in and it takes time to change a school.

“There are heads who specialise in doing the opposite and going in during difficult circumstances and providing stability. That’s a brilliant role but it’s not me. I’m focused on making a school as good as it can be.”

Ms Darnton arrived at Gillotts in 2007 from Wycombe High School, where she had spent four years as a deputy headteacher.

Before that she had four years at the former Qualifications and Curriculum Authority, which was responsible for maintaining and developing the national curriculum.

She previously spent nine years as a maths teacher at Graveney School in Tooting — her first job after graduating with a degree in the subject from Oxford University.

When she saw the Gillotts post advertised she thought it would be a perfect fit for her and she knew of the school as her husband Richey Rea had worked there as a food technology teacher.

Ms Darnton recalls: “I live in High Wycombe so I knew Gillotts had a good reputation. I was really positive about it being 11 to 16 years, which is an age range I really enjoy. You see the change from the students coming in as children and leaving as young adults.”

In her first few months, she made a point of having a meeting with almost every member of staff as she wanted to know what was working and what needed changing.

She began with the middle leaders, heads of houses and subject leaders and went on to see more than 100 people, going beyond just the teaching staff to teaching assistants and office and ground staff.

Gillotts had been rated “good” by Ofsted six months before she joined and a lot of good practice was already in place but she felt driven to make the school even better.

Ms Darnton says: “I had a big piece of paper, which I would write on when I talked to people and made notes about what was going to be a priority for the school going forward. This helped give more focus to what our priorities were, which included our IT provision. Our infrastructure needed to be more robust. It was a big piece of work over the years, coming in different stages, and led to our ‘bring your own device’ policy, which enables us to use integrated IT in everything we do.”

Ms Darnton says the changes she made were inspired by educationalist Dylan William, then assistant prinicipal at King’s College London, and his academic work on “assessment for learning”.

His study investigated what really good teachers do in the classroom.

“We want to be consistent about what a good lesson looks like,” says Ms Darnton. “There needs to be quality written and verbal feedback and understanding how to provide a differentiated response.

“It’s not providing 31 different lessons but being able to be flexible to support those who need it or challenges those who need to go further. That’s a powerful way to talk about teaching.”

She is passionate about developing her staff.

Gillotts was designated a national teaching school last summer in recognition of its work in teacher training, supporting other local schools and continued professional development of its staff.

It is also part of the Oxfordshire Teaching Schools’ Alliance, one of nine leading schools in the group.

The schools work together by sharing expertise, outstanding practice and examples of great leadership across a network of more than 200 schools.

Ms Darnton is also national leader of education for the Oxfordshire Schools Forum.

“We work in collaboration to make sure the next generation of developing teachers are supported in our schools and others,” she says.

“It’s big to be designated a national teaching school because it shows how committed we are to developing teachers.Recruiting teachers is a challenge. The Government has missed its teacher recruitment targets and this is a high cost area and you don’t have to go far for jobs with a London weighting.

“We work hard for our reputation as a school that is committed to teacher learning and development of staff.”

Under her leadership, Gillotts has retained its “good” Ofsted rating twice, in 2012 and 2016. The most recent inspection report said standards had risen since the previous inspection and mentioned “very effective practice” in maths, humanities and foreign languages.

Ms Darnton is proud that the school has improved its GCSE results, regularly finishing in the top three for Oxfordshire in multiple attainment measures.

This includes last year’s results when 69 per cent of students passed maths and English above grade five and 46 per cent achieved the English Baccalaureate.

She says: “When so much in curriculum and assessment is constantly changing, achieving such consistency is a huge challenge and testament to everyone’s hard work.”

Ms Darnton herself continues to teach maths, now working mostly with GCSE students who are trying to get a grade four, a standard pass, in the subject.

“It’s important for the students to know you are able as a teacher,” she says. “It increases their respect for you if they know you can teach well. It’s important the head is known to cut it in the classroom.”

The school converted to an academy in 2012, meaning it could look after its own finances rather than Oxfordshire County Council, the education authority, and take greater control of the curriculum.

Ms Darnton says: “As a ‘good’ school, we had never had a lot of support from the local authority but it was still a big thing to do. It showed we had the confidence to run ourselves.

“As an academy, you stand on your own feet in financial terms, employ your staff and have to choose what you need.

“I am absolutely certain it was right for us. I enjoy the sense we are a small business, which we are running and working with the governors to make decisions on what we do.”

Conversion into an academy allowed the school to take ownership of its land, including part of the playing fields which has been earmarked for 50 homes in the joint Henley and Harpsden neighbourhood plan.

The money from the sale of the land would be reinvested in the school with a new, larger hall, a creative technologies centre and a learning support centre.

The school also hopes to refurbish its science block, improve its sports facilities and move its car park off site.

Ms Darnton says progress on this project has been slower than she hoped.

She says: “There is huge potential but we need to sort out the issue of access to the site.

“One of the things we want is a much better hall. I think there is a big opportunity there because of the amount of use it could provide the community.

“There will also be massive investment in sport. We will be able to level the fields to create two levels and build a multi-use games area.”

In April 2013 the school won a £450,000 government grant for the refurbishment of its gym and a new roof for the design technology block.

A programme to bring all the school’s heating pipes above ground has been completed over the last four years with help from the Education and Skills Funding Agency.

Ms Darnton has also taken to campaigning for better funding for schools across the country.

Last month she and fellow campaigners sent a £142.9million “invoice” to the Treasury, saying this represented the shortfall in money given to schools across Oxfordshire since 2010.

She is among a group of headteachers representing the Worth Less? campaign group from schools across 32 counties. They say £1.7 billion has effectively been cut from the schools budget.

Despite all her outside interests, Ms Darnton says she still loves being in school, walking around the grounds and talking to students.

“They tell me what they have been up to,” she says. “I don’t want to be an educational leader remote from the actual children.

“There are other opportunities, such as joining a multi-academy trust and overseeing other heads, but I’m not interested. Then you’re more distant from parents, staff and students and that’s part of the job I enjoy.

“I’m a stayer and a sticker and there is not a job I want to do more than this one.”