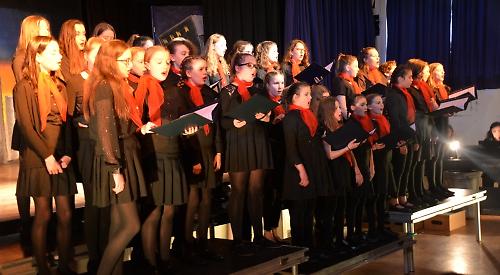 ARTS students at Gillotts School in Henley showcased their talents at a variety show.

The Gillotts Spectacular featured more than 160 pupils who gave music, drama and dance performances on two nights in the school hall, which was packed with families. There was also an art exhibition.

Year 10 students performed A Linha Curva, which incorporated samba, capoeira and contemporary dance to give the piece a Brazilian carnival feel.

The year 8 dance group performed a piece based on Revolting Children from Matilda the Musical and key stage three boys performed a street dance routine to Bruno Mars.

The year 7 dance group created their own version of Hard Knock Life from Annie, the year nine girls performed a dance routine to Michael Jackson’s Smooth Criminal and there was an elite dance performance to Electricity from Billy Elliot.

The Gillotts Voices choir sang Tuppence a Bag from Mary Poppins and the school’s chamber group performed the theme from the Indiana Jones films.

The year nine performers group staged a skit at Grabbit and Scarper theatrical agents with scenes from A Grimm Night for Hans Christian Andersen by Sue Gordon.

Year 11 pupils Maddie Bourne and Ella Davies sang I Know Him So Well from Chess with an accompanying dance by year 9 girls Elsa Horne and Kala Green. At the end of each night all the performers congregated on the stage to perform Toto’s Africa.

Frances David, the school’s head of music, said: “The first meeting to discuss the Gillotts Spectacular happened in May 2017 and we didn’t even have a name for it then.

“Fast forward 10 months, hundreds of hours of rehearsals, costumes and make-up bought, songs, dances and drama lines learnt and we finally made it. The evenings were designed to be a variety show performance — and what variety there was.

“The tech team was very professional and the backstage hands did a great job of changing scenery and arranging props.

“The evenings took immense preparation and a huge amount of hard work so we are incredibly proud of what we and the students achieved.”