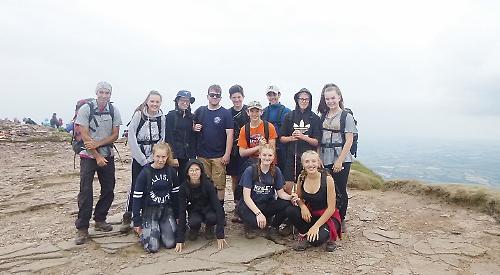 A TOTAL of 58 students and five staff from Gillotts School in Henley spent a week in the Brecon Beacons in Wales enjoying outdoor activities and team-building and confidence-boosting exercises.

They were based at the Woodlands Outdoor Education Centre at the foot of the Black Mountains.

An element of the trip is to encourage self-reliance and teamwork and each evening a team of students laid the tables and served and cleared dinner.

Other students were responsible for sweeping out the minibuses, organising a slideshow chronicling the week’s adventures and ensuring lunches for each group were packed.

A school spokeswoman said: “Each and every student pushed themselves beyond their limits during the week — people confronted and overcame a huge variety of fears, for example, claustrophobia and fear of the dark during caving, fear of heights during the high ropes course, climbing and gorge walking and even a fear of missing out as the entire group ditched their phones for the entire week.

“The fear of silence proved too much during a silent hilltop meditation moment and it was quickly broken by giggles, caused by the unexpected flatulence of nearby cows!

“The groups laughed together, achieved together, cried together as we watched Croatia beat England in the World Cup semi-final in a large classroom.

“They learned to trust each other, to communicate effectively, to push themselves and to gain a new insight into themselves and what they are really capable of.

“The quiet of the bus journey home was testament to the success of the week.”