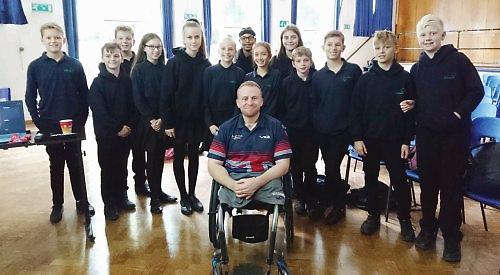 DISABLED athlete Jack Cummins gave a talk to year 8 students at Gillotts School in Henley about living with disability as part of a Personal, Social and Health Education day.

Jack, from Didcot, joined the army at the age of 16, straight from school and trained to become a member of the bomb disposal squad.

His career was cut short in 2010 on his second tour of duty in Helmand Province in Afghanistan when he lost both his legs in an IED explosion.

Waking up a month later from an induced coma, Jack had to find a new purpose in life.

He explained to the students his feelings and the challenges he faced — and still faces — in his post- army life.

He illustrated his talk with a selection of slides from both before and after his injury and cheerfully answered the students’ questions.

Last year, Jack was s part of the GB squad that competed in the Invictus Games in Toronto and won a bronze medal in swimming.