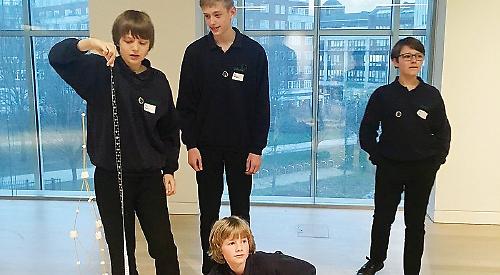 A TEAM of students at Gillotts School in Henley reached the final of Design Ventura, a competition in which 13- to 16-year-olds across the country pitch ideas for new products.

The winning idea is fully developed and goes on sale in the Design Museum shop for charity.

Angus Fraser, Desmond Malatt, Dan Loumont and Cameron Macdonald, who are year 9 creative technologies studentsm came up with SquareStand, a wooden flat pack stand that allows you to prop up a book, phone or tablet (inset picture).

They made it into the top 10 state schools out of 13,400 students participating and were invited to the museum to pitch their idea to a panel of judges that included design, business and entrepreneurial professionals.

Subject leader Frances Wakefield said: “They had a fantastic day, receiving coaching from Design Museum staff, and benefited from watching the other teams deliver pitches of a very high standard.

“Sebastian Conran [a designer] described SquareStand as an ingenious little product and commended the Gillotts team on the maturity of their pitch.”

The team also won the pitching day design challenge to build the tallest tower with spagetti and marshmallows (main picture).

The winner of Design Ventura will be announced next month.