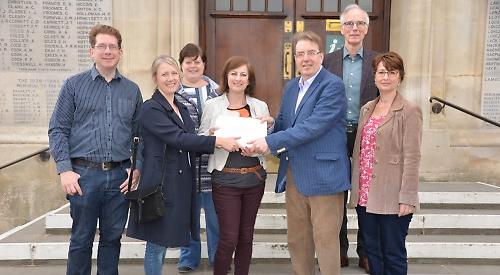 CAMPAIGNERS have presented a petition calling for fairer funding for schools to John Howell to present to Parliament.

Just over 900 people have signed the petition, which was launched by the Henley MP last month.

This followed the Henley Standard’s report that Gillotts School in Henley has been spending money meant for pupils’ education on building maintenance.

Mr Howell was due to present the petition to Parliament on Wednesday before the adjournment debate at the end of all other business.

He said: “The Department for Education will have between six and eight weeks to make a response. It will be nice if there’s a proper understanding of how much it costs to deliver education and that the funding matches this.”

Mr Howell said that while it was right that money went to schools in deprived areas, this often meant there was not enough for those in better off areas that also required it. New town councillor Michelle Thomas handed over the petition at the town hall on Saturday.

She said: “I am really pleased with the number of signatures we got.”

She said: “I think it’s a birthright to have exactly the right funding for education. We all pay our taxes and we deserve the correct amount of funding going into the school system. Capital funding has been cut by 80 per cent. Every pupil in Henley is being underfunded by £650 — that is if you use Bank of England inflation forecasts.

“It all started with austerity. Everyone realises that this is fine for a couple of years but you can’t keep that going for ever. Parents can’t keep raising money for their schools. It has to come from taxes. Free education for all.”