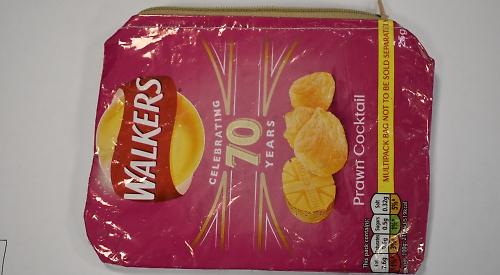 PUPILS at Gillotts School in Henley have received a Young Enterprise award.

Nine children in year 10 took part in a competition organised by the charity, which aims to help young people build a successful and sustainable future.

They raised the £80 entry fee by washing their teachers’ cars.

They decided to make an environmentally friendly product after hearing about plastic pollution in the sea.

They asked fellow students and teachers at the school to donate old crisp packets which they turned into pencil cases to sell. They made these by filling the packets with fabric they bought from Makower UK, of Maidenhead, and learnt how to attach the zips with stitching.

With the help of their teacher Ralph Whitehouse, they also learnt how to promote their product on social media and how to set up a business plan and market report.

They also had to set up a bank account with HSBC, which supports Young Enterprise, with an £80 overdraft to learn about managing their finances.

They were mentored by entrepreneur Peter Woolsey, director of Positive Concepts in Binfield Heath.

The pupils, who called themselves Team Endeavour, competed against teams from eight other schools in South Oxfordshire by selling their products at a trade fair in Abingdon.

The Gillotts students also sold pencils made from recycled newspaper and offcuts from trees.

Judges from Young Enterprise marked the teams on their creativity, manufacturing, customer service and digital presence as well as on a presentation they gave at a showcase event at Abingdon School.

Ashleigh said the competition was hard as they had less time than the other schools because they had entered later and had to work during their lunch breaks. She said: “It was difficult but we got there.”

Amy Havers, 15, said: “The best thing was selling the packets. It gave us a sense of independence. Even though it was on a small scale, we can still apply it to a bigger business.”

She said the experience was helpful to their studies.

Mr Woolsey, who received the award on the children’s behalf at a ceremony in Oxford Brookes University, said: “They only had about half the time they should have had yet still managed to manufacture something and take first prize.

“The quality of the workmanship was significant. They were the only school that did it all on their own without supporting infrastructure. It has inspired them.”

Mr Whitehouse said: “I was extremely proud to see the kids outside the classroom using the skills they’re developing when they had other commitments.

“They did brilliantly, they really did.”