No panic after school ski trip to virus zone 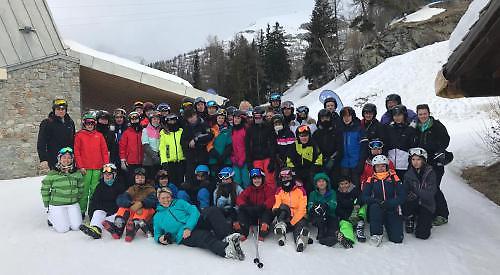 THE headteacher of Gillotts School in Henley has told parents there is no reason to be worried about coronavirus.

Forty pupils spent half term last week on a skiing trip in northern Italy, where an outbreak of the virus has claimed 11 lives.

The Foreign Office is warning against all but essential travel to 11 quarantined towns in Lombardy and Veneto, south east of Milan.

In a letter to all parents, headteacher Catharine Darnton said: “There have been concerns raised about students returning from the school skiing trip to northern Italy over half-term.

“To reassure you, the trip was based in Champoluc, some 175km north west of Milan, close to the borders with France and Switzerland. Milan is west of the small towns that have seen a significant number of cases.

“The party travelled by coach and, after leaving the mountain resort, travelled north (further away from Milan) to cross the border into France.

“The coach on which the students travelled was in resort for the entire duration of the trip.”

Ms Darnton said the school took the safety of its students and staff “very seriously”.

She added: “There is currently no cause for concern at the school but we will keep you informed of any developments and ensure we are keeping the school clean to prevent the spread of any virus.

“We have provided posters for every teaching space on the school site detailing the general hygiene principles for preventing the spread of any respiratory disease and asked tutors to go through this with their tutees.”

Ms Darnton said the school was adhering to advice from the Department for Education and Public Health England.

Ms Darnton said: “Obviously unpredictable situations like this are a challenge for any school lead and we have to be vigilant and make sure we’re up to speed with the current advice and follow it.”

Children returning to the UK from holidays in northern Italy have been sent home from other schools after new government health advice on the virus.

About 30 schools have either closed or sent children and staff home while a “deep clean” takes place after pupils came back from skiing trips.

Meanwhile, Dick Pound, a senior member of the International Olympic Committee, said that any decision on whether this year’s Games in Tokyo will go ahead does not need to be taken until late May.

He said organisers were more likely to cancel it altogether than postpone or move the Games if it proved too dangerous to stage them but said preparations were “business as usual”.

FISA, rowing’s governing body, said is was closely following the situation caused by the spread of the virus.

The first rowing world cup will be held in Sabaudi in April and the second in Varese in May, both in Italy.

The final Paralympic qualification regatta is due to be held in Gavirate in Italy in May.

FISA president Jean-Christophe Rolland and executive director Matt Smith said: “As we are less than two months away from events scheduled in countries that currently have confirmed cases, namely the Republic of Korea and Italy, FISA is considering all possible actions and decisions.”

They said the body would be speaking to as many stakeholders as possible, particularly in host countries.

A spokeswoman for British Rowing said it took advice from FISA and the International Olympic Committee.