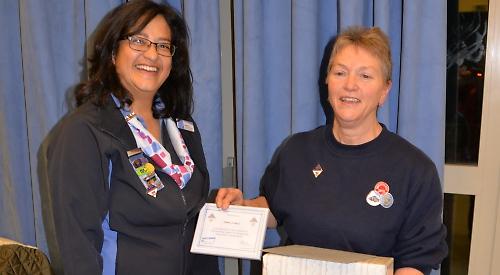 A WOMAN has received a special award for 38 years of service to 1st Nettlebed brownies.

Jane Lewis was presented with the Oxfordshire Lozenge Award for her passion and commitment to girlguiding.

The award was presented to her in front of the brownies by county commissioner Angela Peel at Nettlebed Community Hall, where the group meets.

She also received a card, flowers and a vase as a thank-you from the group.

Mrs Lewis, 59, of Henley Road, Caversham, was moved to tears.

“I was completely overwhelmed and surprised by it,” she said. “I had no idea Angela was talking about me when she started to talk.

“I didn’t realise until she said my name and then thought, ‘oh my goodness, she is talking about me’. It was amazing.”

Mrs Lewis, who is a lecturer in the dental department at Portsmouth University, joined the guides when was a schoolgirl growing up in Woodcote.

She said she had enjoyed it immediately, largely because of Joy Fraser, the leader of her group in Checkendon.

“She was one of those people who come into your life and was so inspirational,” recalled Mrs Lewis, “I enjoyed guiding then and am still enjoying it now.”

Mrs Lewis was 21 when she joined the Nettlebed group and she has stayed with them ever since, overseeing hundreds of young people over the years.

She said: “Guiding is different from school and gives the children an opportunity to work in small groups and individually.

“They work through a lot of different activities, away from their families but in a safe environment. We encourage them and help them find themselves.” When she joined the group, it would meet in the hall at St Bartholomew’s Church in High Street. It moved to the community hall when that opened in 2005.

Mrs Lewis said: “When the new community facility was built we had the opportunity to move there. It gave us bigger premises, a warmer facility and access to all the things on the site, like the play area. The church hall was a lovely brick and flint building but it was quite cold and draughty.”

Mrs Lewis, who is married to Vernon, said the best part of her role was helping young people to develop.

She said: “I am pleased when I see them go on to become teachers, nurses and all sorts of different things. It’s lovely to be part of their journey.

“Some who have special needs have gone on to achieve in their own way and it’s nice to be part of that as well.

“We help to give all the brownies an ‘I can’ attitude. We want them to have a positive outlook.”

Before presenting the award, Mrs Peel said: “I am here because there is a special leader among us.

“This is for her commitment, enthusiasm and passion for making brownies fun and inclusive. Some of her brownies have gone on to become leaders themselves.

“She has always supported other groups in the district by standing in for others and mentoring new leaders.

“Jane is a fun, caring, selfless and passionate person.”

Rachel Leverett, snowy owl for the brownies, said: “Jane always makes sure brownies is fun for the children in the unit and has helped many young people and adults to become confident leaders over the years.

“She is always willing to help others if they need support or guidance. Her fun, energy and positivity has made her a terrific leader and friend.”

Mrs Lewis and the brownies are now looking forward to the group’s 50th anniversary next year.