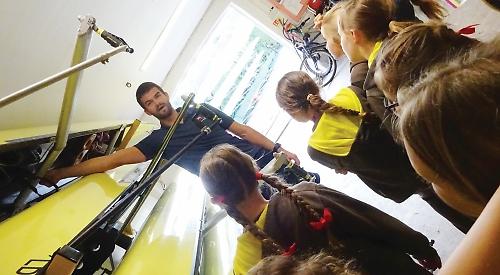 THE 3rd Henley brownies had a brilliant evening at Leander Club in Henley.

The girls were given a tour of the club and saw the many medals and trophies won over the years. One observant girl spotted the largest trophy on display in one of the many photographs lining the walls and they all picked out Olympic rowers that they recognised in the photos.

Rowers Barney Stentiford and Tim Clarke were extremely patient and informative, answering every question the girls could think of and the brownies told Barney that they take part in at least 10 different sports between them. It was pointed out that the tallest children might make good rowers in the future.

The girls were engaged throughout their visit, seeing all the boats and being amazed at the cost and intrigued that the rowers’ shoes stay in the boats, which are steered with wires connected to the rudder.

They also learned how much rowers eat every day, consuming roughly twice the recommended number of calories and two breakfasts!

Leader Rachel Leverett said: “Many thanks to Caroline Mulcahy for organising the visit and, of course, to Barney and Tim for taking the time to share their enthusiasm for the sport.”.

The unit is seeking an adult helper in order to increase available places to local girls. If you are interested, visit www.girlguiding.org.uk