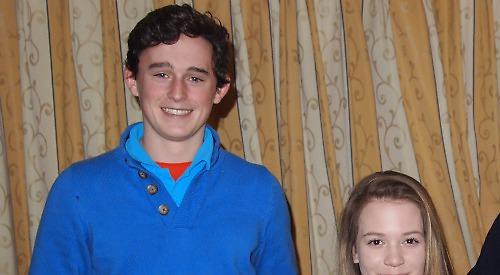 Harris-White, a pupil a Gillotts School in Henley, drove in to mark the start of his captain’s year. He takes over from last year’s captain Katie Hayes.

The drive-in was followed by the final competition of the year, the Kathy Sparks Trophies.

The competition is played in several categories based on age and experience. The main 18-hole competition for lower handicap boys and girls was won by Mairi Weir from Angus Harris-White.

The junior sparks was won by Harry Ingram from Allie Holtom. The nine-hole young sparks went to Lauren Hilditch with Olivia Young runner-up.

There were also special prizes for the coaching group, won by the Davis sisters Georgia, Cleo and Esme and for the mini sparks team of William Waller, Miles Askwith and Rory Browett. After the game, the juniors sat down to a traditional Christmas lunch followed by the annual prize presentations attended by many parents and competition sponsors.

Cups and trophies for more than 20 competitions played in 2016 were presented and this was followed by the annual performance award.

The Committee’s special award for Player of the Year went to Tom Hancock.

The results of the season-long order of merit based on aggregate results from competitions were announced.