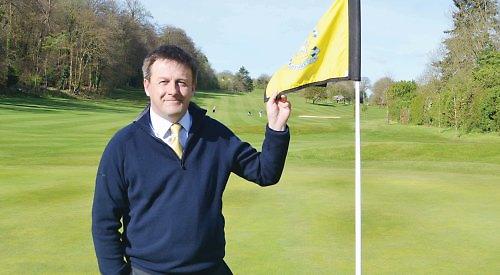 THE new manager of Henley Golf Club is following in the footsteps of his father.

He has been a member of the club in Harpsden since his 11th birthday and used to follow his father on the course every Saturday when he played a round.

Marcus, 43, says: “If anyone ever asks me if my father was an influence, I would say he was.

“I am passionate about the sport and making it as nice as possible for people who are paying membership or green fees.”

Marcus lives in Gallowstree Common with his partner Lucy Cameron and their two children, Molly, 10, and James, five.

He grew up in Lovell Close, Henley, with his father, who worked as a policeman in Henley, and mother Sheila, who was a police officer in Reading until she had Marcus and his older brother Simon, who is now a teacher and lives in Emmer Green.

Marcus says: “My father joined the club in 1972 and at a point in the early Eighties, after he had retired, he was on the committee which looked after the annual pro-am tournament at the club.

“The general manager at the time left and they asked my dad to help them out. He ended up staying in the job for 10 years. I joined Henley Golf Club when I was 11, as soon I was able to back then. Now you can join from the age of eight.”

After finishing school, he worked in sales and marketing before landing his first job in golf 10 years ago.

He was general manager for PinPoint Visualisation, which provides 3D animation of golf courses for broadcasters.

“It was an interesting job where we would create 3D fly-throughs of courses for Sky Sports and NBC in the States,” he says. “We also produced scorecards for major golf courses like Wentworth and St Andrews.”

Marcus moved into golf course management in 2014 when he took became general manager of Feldon Valley Golf Club, near Banbury.

In just over two years in the role, he oversaw improvements to the course and welcomed 200 new members.

When the position became available at his “home” club, he jumped at the chance to apply.

Marcus says: “It’s 10 minutes from home and was a great opportunity to take a job at a beautiful course. The work involves dealing with membership enquiries, potential golf days and any other problems that need sorting. As with any management job in the leisure industry, it’s varied and no day is the same as the next. Communication is very important so the club sends an email to members every day by 6am.”

He wants to market the club more effectively.

“We aren’t running a hospital, we want people to come here and enjoy themselves,” he says.

“Henley is a 110-year-old course with the reputation for being one of the best in the area but we want to enhance it where we can.

“We want people to come here. We have a great membership and used to charge three times the annual subscription to join. Now we don’t because we want more members.

“I want to raise the profile of the course nationally. It has a reputation for being a hidden gem, which usually means we aren’t marketing ourselves properly and not enough people know about us.