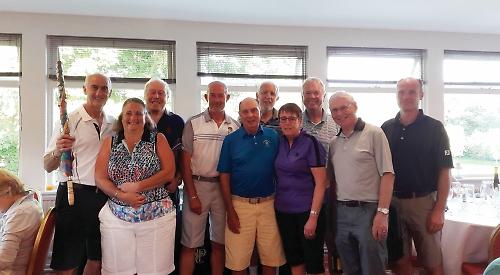 BADGEMORE PARK GOLF CLUB raised £600 for the Chiltern Centre for disabled children in Henley with a charity golf day on Wednesday last week.

Fifty-nine golfers turned out to offer their support for Captain Haddock’s chosen charity.

There were prizes for a variety of skill shots too with, in the men’s, Mervyn Hardman winning nearest the pin on the sixth, John Rowland nearest in two on the 12th and Ken Arlett hitting the straightest drive on the 16th.

The seven teams on each side represented 21 clubs across the two counties and resulted in a resounding victory for Oxfordshire 6-1. The Badgemore Park team was Sylvine Andrews, Carol Searle, Jocelyn Brown and Sarah Deriaz. The ladies’ section also played the second and third of four Oxfordshire Mid-Silver League scratch matches, losing 4-1 away to Bicester but securing the two points with the following home victory of 3-2.

The seniors section continues to be busy and well-supported with 34 entrants to the Monday roll-up, won by Melvyn Keen with 40 points from Bob Mushens and Mervyn Hardman with 39. The men’s mid-week team lost 3-2 at home to Hadden Hill Golf Club but the men’s seniors made up for the loss with four-and-a-half to one and a half win at home to Henley Golf Club.

The Badgemore Park Scratch Team played a knock-out match away at Kirklington coming out 2-1 winners to see them through to the next round. The June monthly medal, played in fine weather on the May 27 and 28 witnessed some very low scoring.

The Saturday results are as follows: Division 1 was won by John Wellman with 64 from Angus Harris White and Mark Stevens, both with 67. Eric Marwood returned 40 points to win Division 2 by five points from John Tugwell and David Woodyer, both 35 points.

The Sunday results are as follows: John Wellman repeated his feat with 67 from Steve Warne, 68, and Alex Harris White, 70. Division 2 was won by Gavin Stewart with 39 points from Graeme Cheese, with 36, and Martyn Walker, with 31.