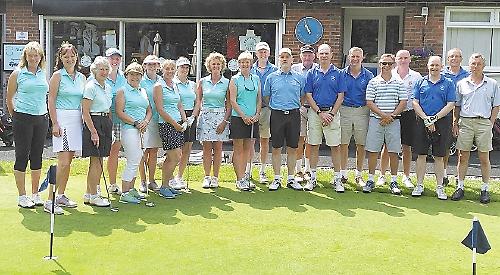 ON one of the hottest days of the year on Sunday Henley Golf Club’s men played the ladies in their annual match, which broadly features players within the five to 12 handicap range.

The men’s side were led by first team captain Nigel Hawkins partnering Matthew Davis against the ladies’ 2016 captain Sally Woolven with her partner Lucy Terris.

The opening match went in favour of the men with both players in fine form. The ladies came back strongly after losing the first two games with a halved game for Clare Dodds and Muriel Quinsac against Sandy Terris and Adam Taylor and then fine victories for Gill Mitchell and Gail Henderson and Maddy Field and Sharon Chamberlain to secure an honourable halved match overall for the second year running.