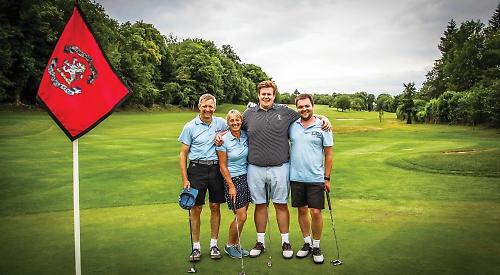 She was joined by her husband Richard, son Edward Unwin and daughter’s boyfriend James Smith.

Clare hit the first drive at 4.30am and the last putt after five-and-a-half rounds at 6.10pm, watched by a small crowd of members and friends who had come to witness the finish and supply a glass of champagne to the weary golfers.

Throughout the day, the players were well supported by family and other club members caddying and supplying food and drink.

Clare’s daughters Lily and Jenny and daughter-in-law Chloe manned the halfway hut, offering drinks and home-made cakes to all the other golfers in return for a donation.

The day raised almpost £6,000 for the Sue Ryder hospice in Nettlebed.

Richard says: “That’s a great reward for the sore feet and backs of the golfers.

“Thanks to Henley Golf Club and its members for supporting the event in aid of such a good cause.”