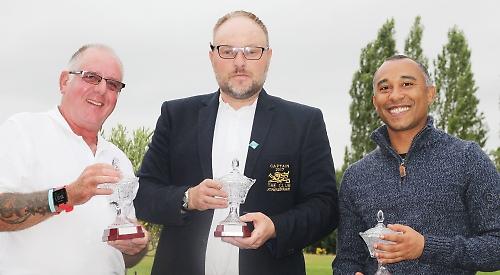 A NEW course record was set at The Club at Mapledurham last week where captains’ week was held.

Alex Luxon set the new course record as just under £8,000 was raised for the captains’ charity, the MS Trust. This is a cause close to club captain’s James Newport’s heart after losing his partner Emily Shepherd on Remembrance Day last year following a seven-year battle with Multiple Sclerosis. Newport was ably supported by lady captain Berni Doyle.

The week started when 93 players entered the captains’ midweek challenge, a three team Stableford competition with the two best scores to count.

Mapledurham’s champion Luxon once again lit up the course to take the top honour with a gross score of 64 for 45 points, beating the old course record with six birdies and just one bogey.

The lady captain trophy and accolade went to Carina Gandy with a score of 43 points. Runners-up with 41 points were Dawn Banbury and Irene Manson. The best guest players were Paul Sherwood with 38 points and Ann Francis with 45 points.

The golf pro Andy Wilde gave freely of his time on both days to run a beat the pro competition and raised £720.

Both days had raffles which raised £814 in total. The halfway hut also offered refreshments and homemade cakes donated by members. Players were greeted by huge smiles from Lucie Lockett and Sue Sadler, raising a yummy £486.

The highlight and ultimate event of the day was the auction run by Chris Gosling and Trevor Gray. Danny Willett donated a golf bag, Justin Rose a signed cap and Ian Poulter two signed photographs.