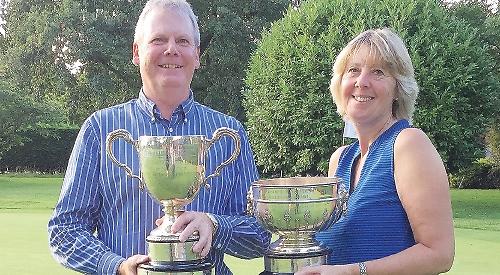 The Adamsons triumphed in a tight competition with only a point between the top five teams. They recorded 42 points, and won on countback from the home-based pairing of Chris Hamblin and Tracey Crew. Three teams were a further point away on 41 points. More than 30 teams entered the competition.

Elsewhere James Walker took the honours in Division 1 of the weekend medal on Saturday with net 68. Three shots further back was Richard Craven with net 71 and third was Matt Gibson with net 72. Walker recorded six pars and four birdies while both Craven and Gibson had 12 pars, although Craven also had four birdies.

Division 2 winner was Mario Atkinson with net 69. Runner-up was Chris Roberts with net 71. Four players tied with net 72, with Merv Jones getting the nod for third place on countback from Dennis Sunderland, Chris Stacey and Darren Lawrence. Roberts recorded nine pars in his round, while Stacey lost out after having a double bogey on the last.

Mark Slater won Division 3 on countback from Daniel Dover, both with net 72. Third was Javier Dieguez with net 73. Walker and Atkinson both received a one shot cut in handicap.

Tony Gonzalez was the resounding winner of Division 1 of the midweek medal on Wednesday of last week. Gonzalez started with a birdie and rattled off nine pars in his remaining holes to finish with a net 66 and a two shot cut in handicap.

Runner-up was Barry Reynolds with net 71 and third was Matt Robertson with net 73. Reynolds also scored nine pars but Robertson went even better, recording 11 pars and three birdies in his round.

Justin Wheeler was another emphatic winner in Division 2, scoring net 65 to win by seven shots. His round included eight pars and one birdie. His efforts also saw him receive a two shot cut in handicap. Second was Michael Busher with net 72 and third was Lynne Rumbold with net 73.

Caversham Heath is hosting the area final of the coronation foursomes on Tuesday when 100 pairs of ladies will be competing to play in the grand final at St Andrews. Volunteers are required to assist the ladies section throughout the day. For further details contact Caroline Dover on caroline.
dover @oldstocks.co.uk