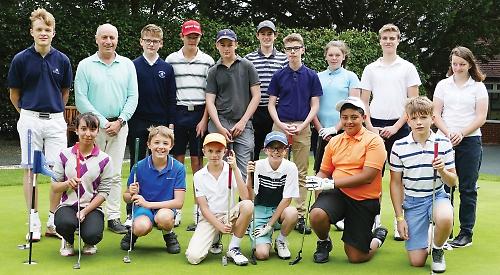 THE annual running of the Pedlar Cup took place last Sunday at Henley Golf Club and in good weather conditions some good scoring was recorded.

David Voss was the eventual winner of the competition with a score of net 66 to deny Gordon Capel on countback. A shot further back were Nigel Hawkins and Andrew Carmichael. Ian Norris, Keith Brockington and Paul Thomalla all had good scores of net 68s.

The seniors held the Madger Trophy competition on Monday and a score of 41 Stableford points from 19 handicapper Julian Burtt was good enough for him to carry home the trophy. David Winter was runner-up with a score of 38 points which was a point better than third placed Peter Ferretti.

The ladies held their Stableford in conjunction with the Barker Salver qualifier last week and this resulted in a win for Rachel Hall in the top division with a score of 34 points. Lucy Terris was runner-up with a score of 31 points on countback from Maggi Buffin. Division 2 was claimed by Caroline Archibald with a score of 38 points which was a couple of points better than Gill Mitchell. whilst Sandie Howell was third with 32 points. Jacquie McCourt took Division 3, again on countback from Mary Smith when both players recorded 40 points. Sally Birkett was third with 38 points which was two points better than Delia Morris and Gay Bentley-Coleman.

Division 4 was won by Jan Gould with 40 points which was a point better than Gilly Hudson and Carol Willson.

Caroline Archibald, the ladies’ captain from 2011, recorded a hole in one on the second hole.

Meanwhile the club’s young golfers had their own competition to mark junior captain’s day last weekend.

The competition was played as a Texas scramble with four teams of matched handicaps competing allowing the younger and less experienced members to play alongside the low handicappers.

It was a busy weekend for junior captain Harris-White who the day before in the main club captain’s day recorded the lowest gross score of the day, a level par 70.

Henley juniors are enjoying a successful season and are currently well placed in the Thames Valley Junior League with two games still to play. Henley girls are active at Oxfordshire County level with seven members playing in county events and recording good results.

An individual level scholarship member, 16-year-old Oscar Rait, had a remarkable achievement with holes in one in consecutive club events.

The first was in a league match against Sonning when his six-iron shot went straight into the hole on the 11th at Henley. The following week in the club’s Loggie Trophy his nine-iron from the 13th tee took one bounce and holed out.