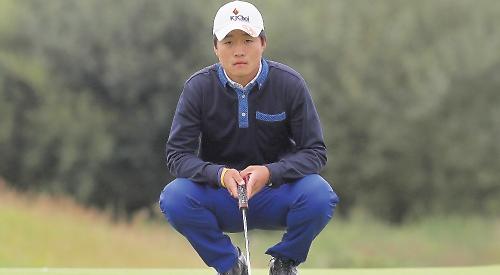 THE second HotelPlanner.com PGA EuroPro Tour event staged by Caversham Heath last week was another success and has put the club firmly on the golfing map.

The staging of the Pentahotels Championship, over three rounds and preceded by a Pro-Am, was reward and recognition of the quality of the course. The club will be further boosted with highlights of the week’s competition broadcast on Sky Sports Golf on Tuesday.

The event lived up to its billing with Min Kyu Kim carding rounds of 65, 67, 73 (-14) to win the championship by two shots to become the tour’s youngest ever champion.

The only dampener on the tournament was the weather on the final day which saw lightning suspend play twice.

Kim weathered the storm to put an electric display in on the front nine of the final round, carding five birdies in the process. His back nine was anything but electric — bogies on the 13th and 14th reduced his lead to four shots. However, back-to-back birdies in response re-established his commanding lead before a double bogey on 18.

“I am so happy and really impressed with my win,” said Kim, who wins £10,000 as well as a brand new Motocaddy S3 PRO electric trolley with a lithium battery, Bushnell Pro X2 Range Finder and Bolle sunglasses.

Kim, who carded a superb eight under par (65), and collected an incredible eight birdies in a bogeyless first round, climbs to fifth in the tour rankings, from which the top five as the end of the season earn promotion to the Challenge Tour.

Stiggy Hodgson (The Wisley Golf Club) carded a solid final round of four under par to finish 12 under par for the tournament and runner-up on 207.

Goring and Streatley’s Matthew Chapman, Alex Lodge (Calcot) and the Caversham Heath duo of Darren Bartlett and Barney Wytchard all failed to make the cut which reduced the field to the top 50 after two rounds.

Elsewhere at the club, Archie Smith shot 10 pars and three birdies in his net 72, which won Division 1 of the weekend medal on Sunday. Runner-up was Gareth Goodall with net 74 and third was Will Tate, on countback from Callum Peart and Dave Williams, all with net 75.

Division 2 winner was Tim Bicknell with net 71. Second was David Cuthbertson with net 72 and third was Wayne Mayers, on countback from Ashley Smith, both with net 77.

Javier Dieguez took the top spot in Division 3, on countback from Samuel Kpani-Addy, both with net 74.