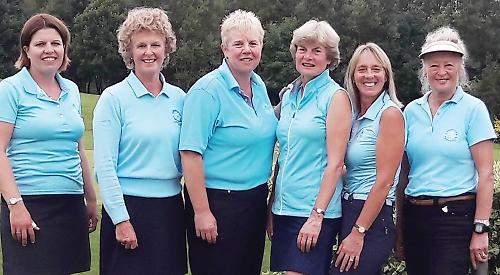 Playing against Frilford Heath ladies in the morning’s semi-final foursomes match, the six single handicap Henley golfers proved to be tough opposition for the much fancied Frilford Heath team.

Clare Dodds and Sally Woolven won the opening match three and one against a strong Frilford Heath pairing. Karen Pollard and Janet Lawson backed this up with a win by the same margin.

This meant that Henley went through to the afternoon finals against Studley Wood who had beaten Oxford Ladies in the other morning’s semi-final match.

Woolven and Dodds went out first in the afternoon’s foursomes match and managed a fine win against their Studley Wood counterparts five and four. Two tight matches followed with both games halved after 18 holes.

The rules of the competition are such that matches cannot be drawn so both Janet Lawson and Karen Pollard and Morag Broom paired with Maggi Buffin went on to play the 19th hole. After a tense extra hole Pollard and Lawson managed to secure the win for Henley. County president Barbara Round presented the trophy to team captain Sally Woolven who said: “It was an exciting and nerve-racking
final but our team just had the edge today because of our strength in depth with everyone making a valued contribution to their matches.”