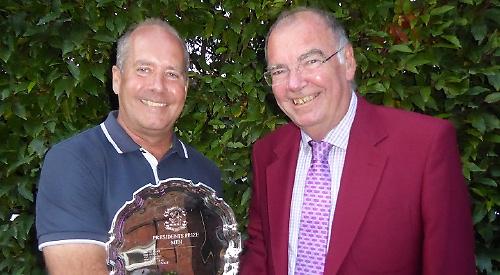 He finished with a score of 41 Stableford points on countback from the club chairman Dave Sexon while Chris Maxted and Peter Muhley recorded 40 points to take third and fourth positions, respectively.

The 19+ competition was won by Geoffrey Varley with a score of 32 points, two points ahead of Tim Lloyd on countback from Fred Maroudas.

The ladies’ President’s Prize winner was Janet Lawson on countback from Alison Barber when both players recorded 36 points. Karen Pollard was third with 33 points.

The Tuesday President’s Prize was won by Harriet Wynn Jones with a score of 42 Stableford points, two better than Erica Brady,

The Junior Presidents Prize saw success for Olivia Young in Division 1 with a score of 41 points, six points better than runner-up Chloe Stanley.

Lauren Hilditch recorded a score of 45 points to take Division 2 of the competition, 12 points better than runner-up Zander Norris.

Meanwhile, Will Tate is the new Caversham Heath club champion.

He held off the challenge of Richard Craven, the 2014 winner and 2015 runner-up, to take the title by one shot.

Half-way through the second round Craven took the lead only for Tate to fight back.

Tate hit 71, including eight pars and six birdies, and Craven hit 76, including 12 pars and two birdies after round one on Saturday.

But it was much tougher on Sunday. Tate started his second round with two bogeys and then recorded two triple bogeys in his outward nine of 47.

Meanwhile, Craven completed his outward nine in 41, despite a double bogey on the ninth, to be leading by one shot at the turn.

Two bogeys in his first three holes coming home saw Tate wobble again but he steadied the ship with five pars and a birdie in his closing six holes for 84.

Craven shot seven pars in his homeward nine to record a back nine of 39, however, a double bogey on the 12th hole and a bogey on the 14th proved costly. His total of 80 was the best score of the second day, but was agonisingly one shot adrift of Tate.

Reigning champion Seamus Smith withdrew from the competition after a disastrous finish to his opening round, ending with two triple bogeys for a score of 81.

Meanwhile, Anne Smith comfortably won the Ladies’ Club Championship for the seventh consecutive season. She shot rounds of 93 and 90 to finish 19 shots clear of the field.

John Endersby took the nett title, on countback from Brian Morrison, both with net 70. Third was Santiago Fernandez-Garcia with net 71.