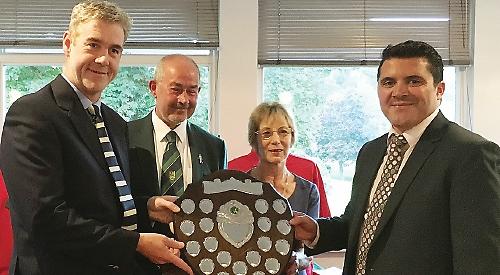 With a field of many regular entrants complemented by some new to the competition, Scott Arlett and his guest, Dave Sheddon, lifted the trophy with a net 62, one shot ahead of second and third pairings, separated on countback, of Adrian Cobb and guest, Iain Wilcox, and Alan Bell with guest Dave Webber.

A contingent of 44 golfers set off from Badgemore Park to play three rounds at the Vale Golf Resort, Cardiff. This was the annual captain’s invitation trip with, for the first time, a piece of official silverware at stake. The Captain’s Tour Trophy has been donated by club vice-captain, David Weston, as a permanent fixture to the annual trophy collection.

Playing three rounds on unfamiliar courses in blustery but mainly dry conditions was too big a challenge for some but captain Dave Haddock prevailed and it will be his named to be the first engraved on the new trophy.

Over the three days the touring group raised £550 towards the captain’s Charity, the Chiltern Centre for disabled children.