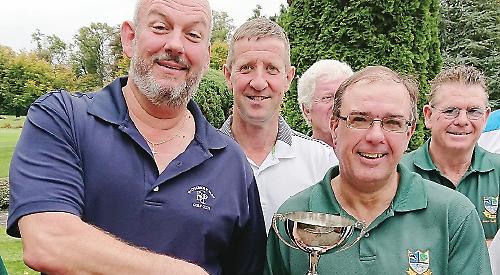 LAST week heralded the end of the summer at Badgemore Park Golf Club with two major competitions and a match bringing the season to a close.

The Burke Cup competition took place on Wednesday with an entry of 38 players from which Mervyn Hardman emerged victorious with a Stableford score of 41 points, followed by Tim Cotter in second place (37) and Steve Carder third (36).

At the weekend the annual A/B versus C team match took place with C team captain Mark Stevens lifting the cup for a second year in succession having led his team to a 4-2 victory.

The medal winners’ final took place on Sunday with Martyn Walker carding a magnificent 85 for a net 64, a comfortable margin from second placed Darren White (78/69) and third placed Neil Linklater (91/69).

Meanwhile in the ladies’ section the Quaich Trophy competition, which runs from April to September, was won by Moira Lawrie with 103 points. Runner-up was Jeanne Nichols with 99 points and in third place was Sylvine Andrews with 97.

The lady captain’s charity competition winner was Elma Grant with 31 points. Andrews was runner-up with Lesley Shurman third on countback.

The greenstaff Christmas fund winner was Joy Brinsford in a competition that was competed for by 32 golfers.