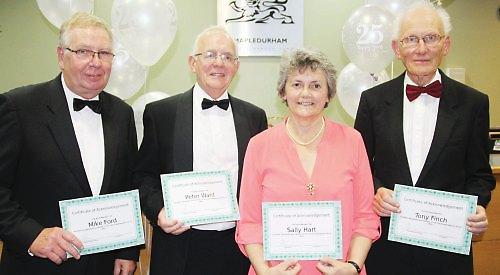 Following the meal, Jeff Gardner made a toast to the Queen before Mike Ford and Sally Hart spoke on behalf of all the members who had been at the club for 25 years.

The Club manager, Christel Garcia, made a toast to all members before the captains’ speeches. To date, close to £15.000 has been raised for the captains’ charity, Multiple Sclerosis.

Certificates were then presented to Peter Ward, Tony Finch, Mike Ford and Sally Hart in recognition of their 25-year membership at the Club.

Earlier in the day on the golf course seven-day competition winners fought for the Kersley Trophy which was won by Chris Rogers with a score of 63 net.