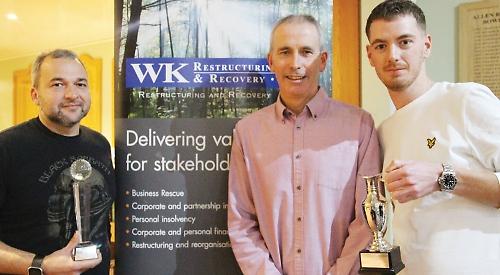 He won the Nick Kennedy Trophy with Darren Barkey and also triumphed in the Kirby Greensomes and the Men Captains Day.

Barkey went on to win the scratch singles competition and, after a close fight with Julie Parsons, he pulled off a few more wins to take the 2017 Midweek Order of Merit and then the 7 Day Order of Merit.

Paul Evans and Keith Newby proved to be a formidable pair, winning the Roger Dearing, the Foxtrot and the Midweek Winter Pairs competitions.

Evans also won the Gardner trophy and the Captains’ Drive In and came second in the 2017 Order of Merit whilst Newby finished off his year by winning the Midweek November Stableford competition with 44 points. This resulted in a 1.6 handicap reduction, making a single figure golfer for the first time.

In the ladies section, Julie Parsons, this year’s women’s club champion, won the Midweek Classic with Theo Farley and the Foxtrot.

She won the Ladies England Golf Medal Gross and Nett prizes and the Ladies Eclectic prize. Carina Gandy won Captains’ Day for the ladies, the Midweek Mixed pairs and the 7 Day Summer Singles.

Audrey Turton triumphed in the Ladies England Golf Medal. She was the overall winner of the competition with the four best scores taking her through to the regional final.

Meanwhile, there were some tight finishes in all three divisions in the Weekend Stableford at Caversham Heath Golf Club on Saturday. Matt Gibson won Division 1 with 40 points with halves of 19 and 21 points, including 10 pars and one birdie.

Runner-up was Jon Winstanley on countback from Matt Robertson, both with 38 points. Winstanley recorded 10 pars while Robertson had 12 pars, one birdie and an eagle, although he ended with two bogeys.

In Division 2, one point covered the top seven players. Stuart Webb came out on top with 38 points with even halves of 19, including a nil return.

Anne Smith came in second on countback from Jack Turrill, David Holloway, Simon Walker, Lee Kirton and Stephen Halford, all with 37 points. Smith had one nil return, Turrill bogeyed the last while Holloway had three bogeys to end. Kirton also ended with a bogey while Halford had two doubles to finish his round.

Niall Ward won Division 3 with 34 points while Raef North won the race for the runners-up spot, on countback from Jim McGiveron and Andy Ward, all with 33 points.

Justin Wheeler claimed the top prize in Division 1 of the Midweek Stableford with 39 points. Runner-up was Jack Turrill, on countback, from Barry Reynolds, both with 37 points. Reynolds ended with a double bogey, but earlier got off to a flying start, recording six pars and a birdie in his first seven holes.

Division 2 winner was Raef North on countback from Jim Willson, both with 39 points. Both North and Willson had two nil point scores on their cards, but Willson also carded a double bogey on the last. Third was Javier Dieguez with 36 points.