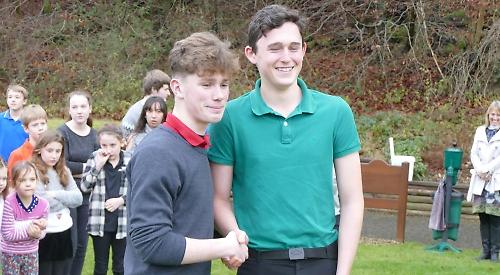 Max Gosby, a pupil at Gillotts School in Henley and Shiplake College, drove in to mark the start of his captain’s year.

He takes over from last year’s captain Angus Harris-White.

Before the drive-in, the club held its final competition of the year, the Kathy Sparks Trophies.

The competition was played in four categories based on age and handicap level.

He secured 38 Stableford points from Oscar Rait, with 35 points, who edged out Mairi Weir on countback.

The Young Sparks, also 18 holes for handicaps up to 36, was won by Liam Hilditch with a fantastic 49 points from his sister Lauren who scored 39 points.

The Junior Sparks nine-hole competition for handicaps up to 54 was won by Toby Phillips by one shot from Zander Norris.

The younger players had group tuition from the PGA coaches and then a team competition on the course which was won by Ben Griffith, Olly Judge, Ben Anderson and Toby Pinnington.

After the competition all the players enjoyed lunch and team quizzes.

In the afternoon, parents and sponsors assembled for the presentation of prizes for the 21 club competitions played in 2017.

The results of the season-long Order of Merit, based on aggregate results from all the seasons’ competitions were announced.

Winner of Division 2 girls was Lucy Hucker, from Lauren Hilditch and for the boys, Fergus Heggie, from Zander Norris.

The committee’s Player of the Year award was presented to Angus Harris-White. He started the year with a six handicap and finished at two. A highlight was winning the main 36-hole Club Championship after a play-off.