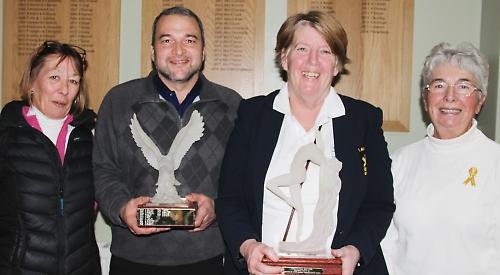 THE new captains at The Club at Mapledurham — Frank O’Neill and Karen Bridges — teed off following their captains’ drive-in competition on New Year’s Eve in an event that saw 80 players compete in the bogey/par competition.

Paul Saunders took the honours in the men’s competition with a +4 score. Ian Piggott with +3 was runner-up and Carl Lyons with +2 third. Berni Doyle with a score of zero took the ladies’ honours on countback from Carole Gardner with Debbie Harris, with -1, third.

Despite rain starting at the end of the competition, all the players gathered around the 18th hole to watch the outgoing captains of 2017, James Newport and Berni Doyle, putt out before moving to the first tee to watch the incoming captains, O’Neill and Bridges drive off.

Before the start of the competition players bought lollipop sticks to place where they thought the incoming captains’ drives would reach. This raised just over £100 to kick-start their new charity. Winners were Carole Gardner and Kevin Farrell.

Back in the clubhouse, following the presentation of the prizes a cheque for £14,000 was presented to outgoing captains representing the total amount raised over the year for their charity, the MS Trust.

After donning their new captains’ blazers O’Neill and Bridges announced Children with Cancer UK as their charity for the year.

The first monthly medal of the year was won by Guy Topham with a net 66 score. Division 1 saw Paul Gardner take the honours with 67 points on countback from Jack Beaven with Kevin Kersley third with 70. Division 2 was won by Guy Topham with Richard Barton runner-up and Trevor Gray third. Tim Anderson took the honours in Division 3 with Tim Mitchell second and Jon Allamby third. Nearest the pins were Paul Saunders and Kevin Woods.

There was a tight finish to the 4-3-2-Waltz competition at Caversham Heath on Sunday with two points separating the top three teams.