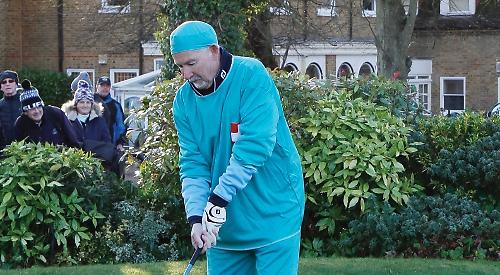 The formal handover took place at the annual general meeting on Saturday evening when outgoing captain David Haddock addressed those assembled with thanks for their support throughout his 12 months in the role before helping Weston into his club captain’s blazer.

Weston made a short address in which he announced Prostate Cancer UK to be his chosen charity which he has spent his life working for in the medical profession.

The following morning witnessed the traditional captain’s drive-in with a gathering of more than 150 members looking on as the Weston played his first drive of the year suitably attired in surgeon’s scrubs outfit.

The following Texas scramble competition, lunch and charity auction raised more a £1,000 for his chosen charity. The competition was won by June Gaffney, Asa Phillips, Kevin Grant and Les Hines with a gross score of 63, net 56.4.