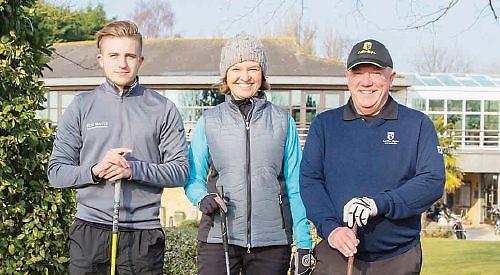 A WARGRAVE resident was among the three new captains to drive in at Castle Royle last week.

In all 120 members ranging in age from 10 to 75 took part in the captains’ drive-in to mark the start of a new golfing year at the Knowl Hill club.

Men’s captain Dave Leathers, junior captain Harrison Arnold and lady captain Sue Gutierrez each drove off to start the day and players then spread all over the course for the shotgun start.

Outgoing captains Seb Brock and Nicola Clarke, revealed that they had raised more than £17,000 for their charity the Julian Starmer-Smith Lymphoma Fund. They then placed the captains’ blazers on Leathers and Gutierrez who in turn announced their choice of Maidenhead-based charity, Alzheimer’s Dementia Support, as the cause for this year.

Leathers has been a member at Castle Royle for a number of years but is enjoying being able to play a lot more now he has retired from his job at Reading Blue Coat School.

Meanwhile Gutierrez, who lives in Wargrave where she plays for the village tennis club, joined Castle Royle six years ago and has now firmly got the golfing bug.

Arnold, 17, is already a scratch golfer and is hoping to gain a golf scholarship to study in the United States and is coached at Castle Royle by the head pro and England boys’ coach Rob Watts.