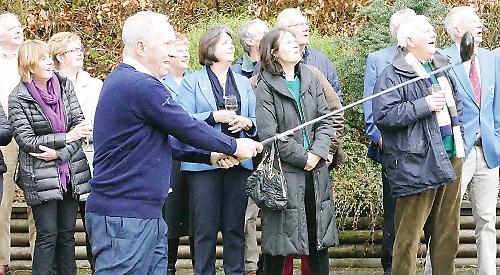 Henley-based Thomas joined the club in 2004 and has played in most sections of the club in that time including the 19+, third team, first team, seniors and mixed teams. He also served on numerous club committees including the juniors and handicaps and competitions. In that time he also persuaded his wife Caroline to join the ladies’ academy where she learnt to play golf under the tuition of club professional Mark Howell and is now an enthusiastic member of the club.

Although the drive-in competition had to be called off beforehand there were prizes for Anne Franklin and Joe Hemani for guessing the resting place of Thomas’s drive-in ball.

The first medal of the year also took place and this was won by Michael Smith with a net score of 67 on countback from Jonathan Fenwick. Colin Grimmett was third with a net 68 which was a shot better than Richard Fenn, Keith Brockington and John Baker.

The third team Stableford was won by Richard Fenn with 37 points which was a point better than Kenny Kent and the new club captain Thomas.

The junior Wagner Cup Division 1 was won by Max Gosby with 35 points which was two points better than runner-up Leo Allen. Tom Hancock was third with 30 points. Division 2 played over nine holes was won by Lucy Hucker with a score of 16 Stableford points.