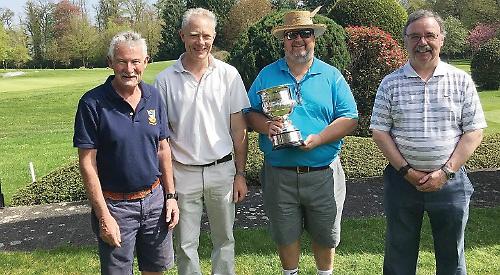 MILLIE ANDERSON, of Badgemore Park Golf Club in Henley has won the Oxfordshire Ladies’ County Championship, played at Oxford Golf Club, for the third time in the last four years and registered a hole-in-one in the process.

Competing against the very best lady golfers from across Oxfordshire, Millie won the 36-hole stroke play qualifier in convincing fashion to make her the number one seed for the final match-play knockout competition.

Her success in the stroke-play was rounded off with a hole in one at the 155 yard, par three, 12th hole with a sweetly struck seven iron.

Over the final weekend Millie won her quarter-final three and two, progressing to the semi-final she won five and three and lifted the trophy with a birdie putt to secure a six and four win in the final.

Meanwhile, the Badgemore Park scratch team suffered a loss away to Studley Wood in the first match of the season, succumbing two and one.

But they more than made up for this with a resounding three to nil win at home to Feldon Valley. The pairings of Dave Haddock and Terry Killick won six and five, Derek Brown and Jamie Palmer won three and two and Fizz Kassam and Michael Moore won three and two.