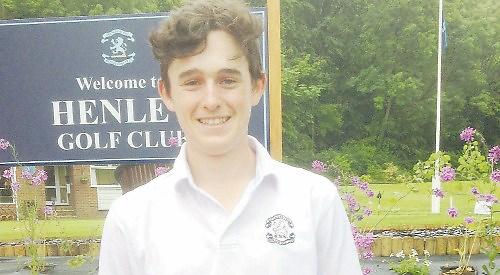 FORMER Gillotts School pupil Angus Harris-White took second place in the South of England Schools’ Golf Championship held at Bush Hill Golf Club on Tuesday of last week with a gross score of one over par.

This earned Harris-White, 17, selection to represent the South of England in the English National Schools’ Championship which will take place at The Shire Golf Club on June 25.

Harris-White, a member of both Henley and Badgemore Park golf clubs, is currently studying for his A-levels at The Henley College.

Golf runs in the family as Angus won Division 1 of the Badgemore monthly medal the previous Saturday with a a net score of 68 while his father, Robin Harris, came second and brother Alex third.

HENLEY held the annual running of the Lovell Bowl competition last Saturday, a format which is the same as the club championship but with handicaps taken into consideration.

The competition played over 36 holes saw past club champion Dave Griffin excel in the morning with a gross score of 66 (net 64) which was a shot better than Malcolm Kemp. Steve Needham was third at this stage with a net 66 which was two shots better than Harry Metcalfe and Marcel Petrie.

The good scoring didn’t continue in the afternoon as the competitors tired and the best score of the afternoon was a net 67 from Andy Bryan which along with his morning round of 69 realised a total of 136 (net -4) and with it the main prize. Harry Metcalfe had another good round of net 68 only to lose out on countback to the winner. Malcolm Kemp again matched the winner’s score of -4 but was third on countback whilst Griffin finished fourth with a net total score of -3. Marcel Petrie and Steve Needham were the only other competitors in a field of 52 starters who bettered their handicaps.

The extra medal was won by David Frood with a score of next 68 which was seven shots better than runner-up Harry Hooper.

The ladies’ Stableford took place in conjunction with the Pedlar and Hurst Trophies and in a limited Division 1 Sally Woolven took top spot with a score of 36 Stableford points which was two better than runner-up Maggi Buffin.

BADGEMORE PARK hosted its open anniversary weekend attracting a total of 168 entries, including 88 visitors, representing more than 20 clubs from as far afield as Somerset.

With perfect weather conditions and cash spot prizes for holes-in-one on the par threes and a car on the 189-yard hole 13 the event was well set and, though no one was able to cash in with a hole-in-one, the golf was competitive and results close.

The Sunday round results had, in first place, Bill Hayden and the three visitors of Martin Hawkins, Lesley Hawkins and Wendy Jelden. Second place with two visitors in the team were Terry Killick, Mark Killick, Richard Coghlan and Gordon Hannam and in third Kevin Grant, Darren White, Arron Stevens and Wayne Porter.

The four sponsors of the event — Lexus Reading, Giles Travel, Paragon Financials and Burridge of London — helped make the weekend a significant contributor to the Captain’s Charity, Prostate Cancer UK.

Sixteen players dodged the forecast storms on Thursday of last week to play an American Stableford format competition, the first event of the summer league.

Caroline and Daniel Dover snuck past team Capaldi — Mike and Tom — to take the runners-up spot on countback with 20 points, but they were still two points shy of winners Geoff Parlour and Garfield Bryant.