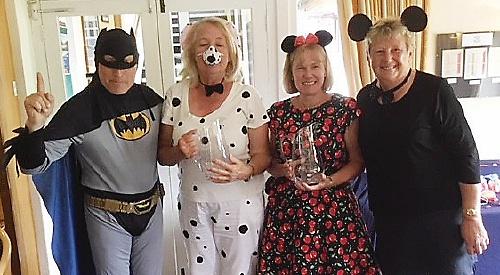 THE ladies’ captain of Henley Golf Club, Ann Thomas, held her captain’s day celebrations competition in aid of the Chiltern Centre for disabled children, her chosen charity for the year.

Many of the competitors were invited to dress up as cartoon characters for the competition and the winners of the Stableford were Anne Hollis as Minnie Mouse and Jackie Saunders as a Dalmatian
Puppy with 45 better ball points.

Runners-up were Joyce Arksey and Karen Brown with 41 points on countback from the pairing of Maddy Field and Rita Sharman-Crawford.

There were nearest the pin prizes for Morag Broom (silver) and Alison Weir (bronze) whilst the best outfit prize was won by Gail Henderson who came as Mary Poppins.

In all more than £400 was raised for the captain’s charity.

The men held the annual running of the Garnham Cup, a better ball Stableford on Saturday and this resulted in a win for the pairing of Peter Craig and Cliff Edwards who were both playing off 11. Their score of 43 points pipped the duo of Dave Griffin and Alan Wilson on countback whilst the pairings of father-and-son Martyn and Harry Metcalfe were third with 42 points, again on countback from Henry Bareham and Chris Fisher.