Iremonger turns up heat at Caversham 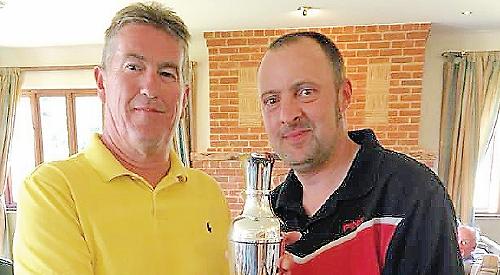 Iremonger scorched around the course on the second day in 40 points — 23 points on the back nine, including a nil return.

Together with the 30 points scored the day before his 71 points was enough to give him a one-point victory over David Jubb with rounds of 36+34=70 points. Third was Archie Smith 31+37=68 points, on countback from Andy Holmes 35+33=68 points.

Niall Ward led after day one with 36 points, alongside David Cuthbertson and David Jubb. However, Ward faded on the Sunday and could only amass 20 points to finish tied for 27th position.

Smith’s 37 points on day two included 10 pars and flour birdies while Holmes had a nil return on his last hole – his second on the back nine on Sunday.

Joyce Collins claimed the J&P Ladies’ Vase on countback from Caroline Reeves and Caroline Dover, all on 32 points. The winning team at the Ways and Means Trust Charity Day at Caversham Heath Golf Club was Sunil Shah, Mon Shah, Madhu Shah and Barney Wytchard. The individual winner was John Parnell with 37 points. Parnell also won the nearest the pin competition and Neil Green recorded the longest drive. The day raised more than £3,000 for the charity.