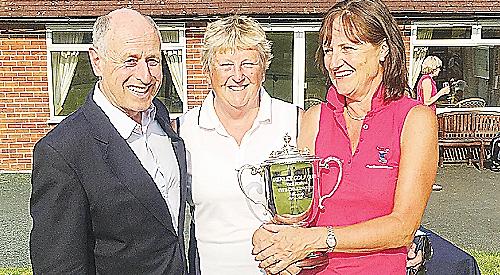 HENLEY held the annual running of the Joe Hemani trophy at the weekend, a medal competition open to all members of the club.

The ladies’ section took the first three spots with ladies’ vice-captain Gill Mitchell recording a score of net 60 to win the trophy by five shots ahead of last year’s ladies’ captain Sally Woolven.

Janet Thompson was third with a score of net 66. Les Franklin was third with a net 68 which was one shot better than Dave Crook’s, Andrew Shard and Caroline Archibald. These players were the only ones who managed to beat their handicap in a large field of the 111 taking part.

The ladies’ section held their monthly medal in conjunction with round one of the Norton Cup and this resulted in a win in Division 1 for Maddy Field with a score of net 72 on countback from Karen Pollard. Sally Woolven was third with a net 74.

Cindy Weight was successful in Division 3 with a net 72 which was three shots better than Ali Mitchell, Delia Norris and Val Foster.

Jan Gould beat her own handicap to take Division 4 with a net 69 which was three shots better than Carol Willson. Kathy Hooper was third with 73 points.

The men’s extra medal also took place and this was won with a net 65 from Bryn Teasdale which won him the event and a two- shot cut in his handicap. Andrew Bryan was second with a net 68 which was a shot better than Nigel Woolven and the inform Dave Crooks.

Paul Sambrook held his junior trophy competition and this resulted in a win for Allegra Holtom in Division 1 with a score of 37 points to pip Olivia Steel on countback. Club champion Angus Harris-White was third with 35 points.

Division 2, played over nine holes, was won by Lucy Hucker with 14 points from runner-up Zander Norris.