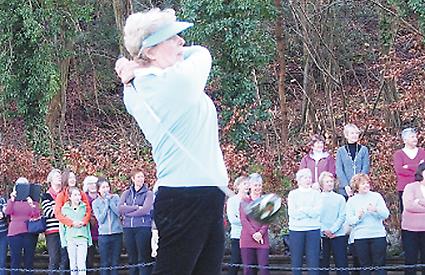 Before the event the ladies’ section held a three ball alliance competition and this was won by the trio of Tina Dalzell, Jocelyn Brown and Noelle Morgan with a score of 83 points.

The new ladies’ captain joined forces with immediate past ladies’ captain Gilly Hudson and vice ladies’ captain Jacqui McCourt to record 78 points to finish second. There was a special prize for the two players only pairing of Andrea Smith and Sadie Law with a score of 65 points whilst another prize went to “team Hillas” consisting of mother Sarah and her two daughters Kate and Sophie who recorded 89 points.

Following the competition French-born Norgrove, who lives in King’s Road, drove the ball straight and true and in doing so earned a prize for Dorothy Cobban who was the nearest in the guess the drive length competition.